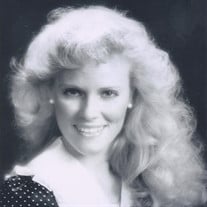 With her family surrounding her, Natalie Jean Proctor McCandless left this earth on February 25, 2015 in her childhood home in SLC, Utah. Born September 29, 1960 in SLC, UT to Arthur C. Proctor & Nancy Margetts Proctor, she grew up in Holladay, attending Olympus High School, where she was a cheerleader and a dancer. She received a BA in Journalism from the University of Utah. She worked for Paramount Pictures, owned a video company with her sister Tracey, and managed the Avalon Video store, the family business, for many years.. She married Dan McCandless on Sept. 12, 1987 in SLC, UT. Together they have four smart, beautiful, kind children: Josh, Jessica, Justina & Jenika. Natalie dedicated her life to being a mom, which she believes is her highest & most noble calling. She rejoiced in the accomplishments of her children. She selflessly gave her entire life to her children, putting her own pursuits and needs aside, contributing all of her talents, time and abilities to the success and welfare of her children. She is an inspiration to her children who have all pursued their goals and aspirations . Jenika followed in her mothers footsteps by pursuing a film degree and writing screenplays. Justina, like her mother achieved a degree in communication and after graduating, served a LDS mission in germany where she met her soon to be husband and now works in journalism. Jessica has a degree in anthropology and works as a flight attendant. Joshua became an IT specialist after returning from his mission in Brazil. Natalie is remembered for her personality, creativity, intelligence, and unwavering faith & diligence. She enjoyed creating beautiful events, including producing wedding videos, planning and creating her own wedding, writing musicals, a book, and a yearly Christmas cultural celebration called the “Culture Quest.” She participated in the Miss Salt Lake Valley, Miss America Pageant in 1985 and was named 2nd attendant to Sharlene Wells Hawkes who became Miss America that Year. One of her most elaborate creative endeavors was writing, directing, and producing the first LDS ward feature-length video for Holladay 2nd Ward called “Saints & Sinners.” Together, Natalie and her sister created the famous annual Academy Awards party where friends and family could come and watch the Oscars together, eat amazing food, and vote on supposed winners. Whoever voted on the most correct winners would receive a cash prize. Natalie was diagnosed with stage 4 breast cancer in 2010. She chose to treat her cancer with natural methods, which kept the disease at bay until her health began to decline in 2013. Then she began radiation treatments which temporarily restored her health so that she could welcome home her daughter Justina from a mission. . After that, she continued treatments, however her health rapidly declined over the past few months. She spent the last two years of her life in the care of kind doctors and nurses, her mother and her daughters, especially Jenika, her full-time caregiver. She is survived by her children; her mother; sister, Tracey (Ray); brother, Jeff. She is preceded in death by her father. Visitation from 10 am-noon, funeral at 12:30 on Monday, March 2, 2015, Cottonwood 1st Ward, 5913 South Highland Dr, SLC, UT. Interment at Holladay Memorial Cemetery, 4900 So Memory Lane.

With her family surrounding her, Natalie Jean Proctor McCandless left this earth on February 25, 2015 in her childhood home in SLC, Utah. Born September 29, 1960 in SLC, UT to Arthur C. Proctor & Nancy Margetts Proctor, she grew up in Holladay,... View Obituary & Service Information

The family of Natalie Jean Proctor McCandless created this Life Tributes page to make it easy to share your memories.

With her family surrounding her, Natalie Jean Proctor McCandless...