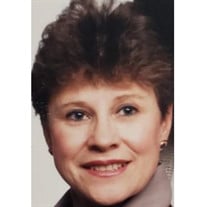 Our beloved mother, grandmother, aunt, and friend passed away on Sunday, May 5, 2019 in her hometown of Provo, Utah as a result of complications due to a stroke. Neva was born on March 28, 1936 to William Keith and Zenna Sorensen in Provo, UT.... View Obituary & Service Information

The family of Neva Orlean Luce Madson created this Life Tributes page to make it easy to share your memories.

Our beloved mother, grandmother, aunt, and friend passed away...