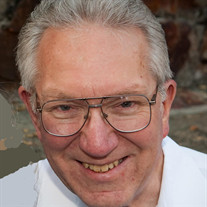 Nolan Douglas Adams, age 68, passed away on October 2, 2015, in South Jordan, Utah. He was born May 18, 1947, in Provo, Utah to Douglas Frank Adams and Mary Nellie Christensen. He married Judy Hunsaker in the Salt Lake Temple on December 13th 1968. After Judy’s death, he married Patricia Annette Taylor in the Salt Lake Temple on December 17th 1971. Nolan thoroughly enjoyed watching and playing sports throughout his life. He successfully played football, wrestled, and threw shotput and javelin in high school. He loved fishing with his children and grandchildren, and was always up for a day trip to the lake. He liked playing horseshoes at the annual family reunion and even built a practice horseshoe pit in his backyard to give him an edge. He enjoyed bowling, and saw to the holding of a family bowling competition every year, where anyone that could out bowl him would be treated to a candy bar. He also worked hard and placed great importance on providing for his family. Nolan worked hard to have good grades in high school and college, and graduated from Pleasant Grove High School and Weber State University with a Bachelor’s degree in Data Processing. His skill and talent with computers allowed him to serve the LDS Church through the development of their computer systems for 22 years. During his work at the Church, he established the first Utah Oracle User Group and served as its president for several years. Nolan also worked a second job at Anderson Lumber in the evening for several years to pay for two of his sons to serve full- time missions at the same time. Nolan loved serving his Heavenly Father, the Savior, and others through church service. He served a full-time mission for the LDS Church in London, England. After his mission, his church service continued through callings such as Bishop, Stake High Councilman, Ward Mission Leader, Nursery Worker, High Priest Group Leader, Sacrament Meeting Greeter, Family History Indexer and Scoutmaster. He is survived by his wife and eternal companion Patricia Annette Adams. Nolan and Annette’s children: Roger Douglas Adams (spouse: Natalie; children: Abbie, Emma and Olivia), Richard Nolan Adams (spouse: Heather; children: Hannah, Tate, Fischer and Rosie), Andrew Brady Adams (spouse: Taihiese; children: Tadyn, Chaylee and Tianna), and Elizabeth Ann Adams. Also, by his brother and sisters: Mary Ann (Harry) Cockrell, Thad (Rosemary) Adams and Nanalie (Joe) Knotts and Judy's mother Bonnie Hunsaker. He is preceded in death by wife and eternal companion Judy Hunsaker, his parents Douglas Frank Adams and Mary Nellie Christensen, father-in-law Donald Hunsaker, father-in-law Ivan Taylor, and mother-in-law Genevieve Taylor. Viewings for Nolan will be held on October 6th from 6:00 until 8:00 PM and October 7th from 9:30 until 10:30 AM. Funeral services will be held on October 7th at 11:00 AM. Both viewings and the funeral service will be held at the LDS church located at 8825 South 1095 West, West Jordan, Utah. There will also be a short graveside service directly following the funeral services at the West Jordan Cemetery located at 7800 South 1300 West, West Jordan, Utah. In lieu of flowers, Nolan’s family asks that you please donate to the LDS General Missionary Fund. Nolan’s family would like to publicly give special thanks to the staff at Carrington Court, Brighton Home Care and Hospice, and LDS River Oaks 1st Ward.

Nolan Douglas Adams, age 68, passed away on October 2, 2015, in South Jordan, Utah. He was born May 18, 1947, in Provo, Utah to Douglas Frank Adams and Mary Nellie Christensen. He married Judy Hunsaker in the Salt Lake Temple on December 13th... View Obituary & Service Information

The family of Nolan Douglas Adams created this Life Tributes page to make it easy to share your memories.