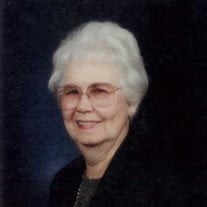 NEPHI - Norinne Hayward Wessman Husbands, 93, passed away peacefully in the early morning of Feb. 15, 2020, from incidents due to age at her home in Nephi. She was born Aug. 27, 1926, in Ogden, to Henry Richard Emmanuel and Hazel Jean Hayward Wessman. Norinne was number 12 of 14 children in her family and the last to leave this Earth. She was married to Melvin C. Husbands with which she had her children; they later divorced. Norinne worked for Mountain Bell for 30 years before an early retirement. She loved the arts and was an usher for Salt Lake County arts department for many years ushering at the Utah Symphony and the Capitol Theater. As an avid member of The Church of Jesus Christ of Latter-day Saints, she also ushered at the Tabernacle for the music and the Spoken Word faithfully every Sunday for over 25 years. Norinne was a loving mother, grandmother, sister, aunt and friend to a large loving family. She had 2 children, Jill (deceased) and Kelly. She was a caring and devoted grandmother to seven grandchildren, Jennifer (Tony), Michelle (Dale), Kristin (Mathew), Kevin (Crystal), Sean, Michael and Scott; and eight great-grandchildren, Zoe, Axton, Dante, Corbin, Jayli, Elias and Henry. Over the years, she often spent generous time with her grandchildren, taking care of them and giving them special love and memories. She taught them to make her favorite recipes and do extra chores such as ironing and proper techniques for scrubbing floors. She loved to watch musicals with them, have them over for a week in the summer, dinners at Chuck-A-Rama, and playing cards, especially Hand and Foot. She helped teach the game to all the neighbor friends, cousins and anyone who would like to learn. She is survived by her son, Kelly; and the grandchildren and great grandchildren as mentioned above; as well as a great number of extended family members and friends. Norinne was preceded in death by her parents, Henry and Hazel; daughter, Jill; and all her siblings and their spouses. A special thanks to Dr. Mark Oveson for his years of care, and to the staff with At-Home Health and Hospice in Salina who caringly helped all of us through her last days. All of their efforts and advice were very much appreciated. A viewing will be held Thursday Feb. 20, from 6 to 8 p.m., at the LDS Church located at 345 East 500 North in Nephi. A graveside service will be held Friday, Feb. 21, at 12 noon, at the Wasatch Lawn Memorial Park, located at 3401 S. Highland drive in Salt Lake City, underneath the direction of Serenity Funeral Home.

NEPHI - Norinne Hayward Wessman Husbands, 93, passed away peacefully in the early morning of Feb. 15, 2020, from incidents due to age at her home in Nephi. She was born Aug. 27, 1926, in Ogden, to Henry Richard Emmanuel and Hazel Jean Hayward... View Obituary & Service Information

The family of Norinne Hayward Wessman Husbands created this Life Tributes page to make it easy to share your memories.