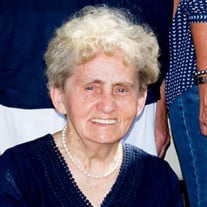 Norma Anderson Shoell, age 86, passed away on April 20, 2020 at her home in Salt Lake City. She was born on July 26, 1933 to James Ammon Anderson and Beatrice May Nurse Anderson in Raymond, Alberta, Canada. Mom enjoyed her days in Raymond growing up with five rambunctious but loving brothers. Her dad passed away when she was ten. This was a tremendous loss for her family. Mom was an excellent student and placed second in Alberta’s provincial exam in grade 9. At age 18, the family moved to Vancouver, British Columbia where many opportunities awaited. Mom was introduced to a love of accounting while working at Plimleys Motor Co. She served as a local missionary in the Western Canadian Mission for the Church of Jesus Christ of Latter-day Saints. In 1958, while on a trip to England to visit relatives with her mother, Mom met Kenneth Shoell who was then serving a mission for the Church. After Ken’s return to Utah, they courted long distance and were later married in 1959 in the Salt Lake Temple. Together they had five children. They divorced in 1975. Mom’s life is defined by her integrity, faith, and hard work. She was a meticulous bookkeeper who made sure that every penny counted and was accounted for. She worked at St. Regis Paper Company for over 20 years. Mom was the hardest working woman we knew. Through her example, she instilled in us the desire to be self-sufficient. Her love was unconditional. She was a devoted daughter, sister, mother, and grandmother. Her grandchildren will cherish their memories of summers at Bear Lake, Christmas stockings, sleepovers, making and decorating sugar cookies, and many more. Mom was an active member of the Church of Jesus Christ of Latter-Day Saints. She served in various callings, including as an ordinance worker in the Salt Lake Temple. Mom was healthy and strong and loved life. She was disciplined and obedient. She had hoped to live to be one hundred years old, but in 2018 received a diagnosis of Follicular Thyroid Cancer. Through this trial she remained positive and never complained. We express our gratitude to Quality Home Health & Hospice, with a special thanks to Becky and Alexis who showed true compassion and love, as they served and cared for her, along with her caregiver, Ailena. A special thanks to Maxine who was a great advocate for Mom’s care. Maxine kept her active, energized, and traveling when she was able to. Mom took great comfort in Maxine’s companionship. Mom is preceded in death by her parents and brother, James Arthur Anderson. She is survived by her children, Kristine (Todd) Richardson, Kevin (Shelly) Shoell, Jeanette (Michael) De La Mare, Maxine Shoell and Brian (Kelly) Shoell, her brothers Bernard Anderson, Richard (Anne) Anderson, Douglas (Diane) Anderson, Laurence (Lorna) Anderson. Norma is survived by 20 grandchildren, their spouses, and 14 great-grandchildren. Due to current circumstances, a private graveside service will be held on April 22, 2020 at Larkin Sunset Gardens, 1950 E 10600 S, Sandy, Utah 84092.

Norma Anderson Shoell, age 86, passed away on April 20, 2020 at her home in Salt Lake City. She was born on July 26, 1933 to James Ammon Anderson and Beatrice May Nurse Anderson in Raymond, Alberta, Canada. Mom enjoyed her days in Raymond growing... View Obituary & Service Information

The family of Norma Anderson Shoell created this Life Tributes page to make it easy to share your memories.