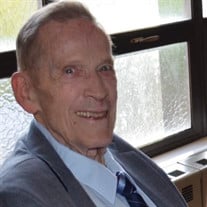 Early in the morning of June 16, 2017, Norman Frederick Hyatt, our own “Gentle Giant”, quietly parted this life to rejoin his beloved wife and parents, and the many other family and friends who had preceded him. “Norm” was born on December 29, 1926 in Joliet Illinois. He was the third child born to Clarence and Belle Hyatt and grew up in a loving environment where he spent a good deal of time with grandparents and extended family. In 1937 Norm, his parents, brother Preston, and sister Anita were all baptized members of the Church of Jesus Christ of Latter-day Saints. The family all became life-long examples of faith and service. Norm eventually left his home in Illinois to attend college at Brigham Young University. There in 1948 he met the lovely Betty Marie Anderson, who became the one and only love of his life. They were together for more than 53 years, from their marriage in the Salt Lake Temple on June 8, 1949 until Betty’s death on February 2, 2003. Norm’s faith in a happy reunion with his sweetheart never faltered, and it was that faith that sustained him through the subsequent years without his sweetheart by his side. Norm’s love of family was a hallmark of his long life. He and Betty had four children, all of whom survive him: Ronald Hyatt (Kristy Lemoine, Tamara Holbrook), Kim Hyatt, (Teddi Davis), Robyn Ballard (Frank), and Jeanine LeCheminant (David); thirteen grandchildren, and fifteen great-grandchildren. Together Norm and Betty created a home where love was always forefront. For Norm, every moment was a teaching moment, and he imparted practical lessons to his children while at work and at play. Norm and Betty also taught principles in their home such as obedience, frugality and hard work through example, but there was also more than ample time for fun and recreation. The family frequently traveled together, often with Betty’s parents, and enjoyed spending time in national parks, historical sites and recreation areas throughout Utah and from coast to coast in the rest of the US. Later, Norm and Betty enjoyed travel to Europe, South America, the South Pacific, Hawaii and Alaska. Norm exemplified all of the qualities for which the “Greatest Generation” has been justly honored, but his military service during World War II was cut short by a serious training injury. Norm, therefore, was not to make his mark on the battlefield. Instead, Norm made his mark as an accomplished and passionate educator. With undergraduate, master’s and doctorate degrees in education and education administration, Norm first served as a school teacher and school principal in two school districts in Utah, and during that time he was elected president of both the Teachers' Association in Salt Lake City and the president of the Utah Education Association (UEA). Later Norm became the first Executive Secretary of the Teachers' Association of Long Beach, California, and after returning to Salt Lake City Norm served successively in the Utah State Office of Education and the Granite School District. In 1970 Norm joined the faculty in the Department of Educational Administration at BYU, where he remained until his retirement, in 1991. He was known as a caring instructor, teaching classes in teacher preparation, school finance, school law, and educational research and statistics. During his distinguished tenure his duties also included serving as chairman for students acquiring advanced degrees in Educational Administration and Community Education. He also directed the Department's off-campus doctoral and master's degree programs in the western United States and American Samoa, and Norm served as the Director of the Rocky Mountain Community Education Center at BYU. Through the years Norm held a number of other jobs to support his family. At various times he was employed as a custodian, taxi driver, floral delivery driver, landscape and sprinkler system installer, and education consultant. He instilled the value of work and independence in his children, often providing them with opportunities to earn spending money for vacations and Christmas by selling candy or scoring scholastic aptitude tests. Norm’s service to his faith included callings as a bishop and high counselor at BYU, and in recent years as an ordinance worker in the Jordan River and Draper temples. He was known for his dependability and for fulfilling any and all assignments that were given to him. In addition to travel and time with his family, Norm enjoyed watching sports, camping, fishing, gardening, jigsaw puzzles and card games. He was a formidable canasta player and invariably won the many games he enjoyed with his children. Norm is fondly remembered for his love of cooking and baking, and his talents in the kitchen are legendary. Few people left Norm’s home without a treat of homemade cake, pie or cookies. Norm was a loyal and trustworthy friend, faithful husband, loving father and grandfather, and dedicated servant to the Lord. Our loss is tempered by the sure knowledge that he was, indeed, a good and faithful servant, and that he has entered into the joy of his Lord. Norm’s family wishes to extend their sincere gratitude to the many area health care professionals who tended to Norm’s needs during the past year. In particular, we are grateful to the employees of the Cascades at River Walk Rehabilitation Center and Silverado Utah Hospice for their love and patience during the last weeks of Norm’s most recent illness. Funeral services will be held on Wednesday, June 21 at 11:00 AM at the Brown Farm Ward Chapel, 420 East Stokes Avenue in Draper, Utah. Viewings will be held on Tuesday, June 20 from 6:00 to 8:00 PM and from 9:30 to 10:30 AM the morning of the funeral at the same location. Burial will follow funeral services at the Larkin Sunset Gardens, 1950 East 10600 South, Sandy, Utah.

The family of Norman Frederick Hyatt created this Life Tributes page to make it easy to share your memories.