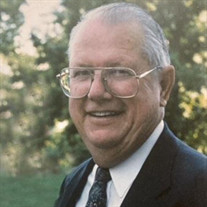 Orson J. Christiansen - Funeral Service Time: Oct 1, 2021 12:00 PM https://us02web.zoom.us/j/87533634949?pwd=NDVXT3JhV2EzRlJxL0tibzhJUHFPdz09 SANDY – Orson J. Christiansen died Friday, September 24, 2021, at the Intermountain Medical Center in Murray Utah, from heart failure related to Pulmonary Fibrosis. Orson was born on February 14, 1937, in Gunnison, Utah to Milton Andrew and Erma (“Larsen”) Christiansen. In 1955, he graduated from Gunnison High School, as co-valedictorian. Early on he began a love of mathematics and electrical work while working with his father. To further this education, he accepted a scholarship at the University of Utah enrolling in the school’s engineering program. He was also a member of the school’s marching band playing the Baritone horn. On June 20, 1958, after years of dating, and long-distance writing, he was married to his eternal companion Margaret Geraldine (“Jeri”) Blaylock, in the Salt Lake City Temple. The marriage was officiated by Orson’s great uncle, ElRay Christiansen, who was serving as the temple president. Orson and Jeri enjoyed over 63 years of marriage and remained each other’s sweetheart, and her the “love of his life.” Upon completing his Electrical Engineering (“EE”) degree in 1961 Orson passed his licensing exams and began to work for Hercules, Inc., in the company’s pioneering space and missiles department. Over the next ten years Orson assisted in the design and creation of several aeronautical devices including the Minuteman Intercontinental Ballistic Missile (“ICBM”). In 1970, Orson accepted a position with Bussmann where he became a Senior Sales Manager and Sales Engineer providing electrical supplies and engineering expertise throughout Utah, Nevada, Colorado, Wyoming, Idaho, and Montana. He worked for Bussmann for over 35 years until retiring in 2005. Orson was a member of the International Association of Electrical Inspectors (“IAEI”) and served as an Executive Committee Member of the Northwestern Section. He also taught electrical safety courses at the University of Utah as an Adjunct Professor. For the past 15 years, Orson worked as a safety instructor traveling around the United States training on Overcurrent Protection and the National Electrical Code. For almost 40 years he sang Baritone for the Salt Lake Symphonic Choir, enjoying many great and wonderful associations. Orson and Jeri have resided in the Willow Creek area of Sandy since 1978. He was a member of the Willow Creek Stake of the Church of Jesus Christ of Latter-Day Saints. An active member, faithfully fulfilling any calling extended. Orson is survived by his wife Jeri (Sandy, Utah), his eldest son Brent (Sandy, Utah), his daughter-in-law, Joy Christiansen (Sandy, Utah), his daughter Andrea (“Jill”) Sutherland (Sandy, Utah), his son Orson Jeffrey (“Jeff”) & Laury Christiansen (Taylorsville, Utah), his son Gregory James & Tiffany Christiansen (Draper, Utah), and his sister Lily Jean & Blake Lott (Toppenish, Washington). He is also survived by 17 loving grandchildren. Orson was preceded in death by his son Michael Steven Christiansen and his son-in-law Kyle Sutherland. Funeral services will be held at noon, Friday October 1, 2021, at the Willow Creek 2nd Ward Chapel located at 2400 East Alta Canyon Drive, Sandy, Utah with Bishop Bill Christensen officiating. Friends and family may attend a viewing at the Chapel between 10:30 am and 11:45 am. With Internment at the Ben Lomond Cemetery, in North Ogden.

The family of Orson J. Christiansen created this Life Tributes page to make it easy to share your memories.