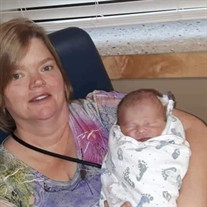 Patrice Ann Grossman (nee Mitchell) passed away unexpectedly at Utah Valley Hospital, October 30, 2020. Her husband and children were heartbroken that the coronavirus prevented them from being with her at the end. She was born in the same hospital, where she eventually passed away, on December 22, 1970 to Patrick Neil and Ruth Ann Mitchell. She married Bryan Russell Grossman on February 4, 1995 and they were the parents of five children. While she lived part of her childhood in Fort Stewart, Georgia, as well as Orem, Pleasant Grove and Roosevelt, Utah; She lived the majority of her life in Provo where she graduated from Provo High School in 1989. She then attended Snow College where she received her Associate Degree in 1993. She then attended UVU where she became a registered nurse and worked in the NICU until her death. She loved working with the newborn infants and helping to ensure they received the critical care they needed. She was proud of her children and lavished constant attention upon them. At times they called her a “dance mom.” She was also accomplished at sewing and desired to make the world a better place. She never hesitated to provide assistance to others when asked to do so. She is survived by her father, her husband, her brother Charles Nathaniel II (Brigette) Mitchell, her sister Shawnan Mayo (Carl), and her children: Natassja Michelle French (Michael) of Spanish Fork, Zathan Andrew Grossman (Audraya), Anastasiya Ruth Grossman, Nataliya Kassandra Grossman, and Charley Victoryia Grossman all of Provo. She has one grandson, Leo Elijah Grossman and fifteen nieces and nephews. She was preceded in death by her Mother and two nephews. Her funeral service will be held at the Sunset 5th Ward located at 1402 South 570 West in Provo. There will be a viewing at 10 A.M. with the funeral at 11. Burial will be at the East Lawn Memorial Gardens in Provo. The family wishes to thank the staff at Utah Valley Hospital for their heroic efforts to save her life at the end.

Patrice Ann Grossman (nee Mitchell) passed away unexpectedly at Utah Valley Hospital, October 30, 2020. Her husband and children were heartbroken that the coronavirus prevented them from being with her at the end. She was born in the same... View Obituary & Service Information

The family of Patrice Ann Grossman created this Life Tributes page to make it easy to share your memories.