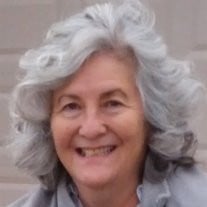 August 14, 1952 – December 19, 2013 Patricia Louise Bilderback, 61, passed away on December 19, 2013, in Midvale, Utah. She was born on August 14, 1952, at the Ryuku Army Base in Okinawa, Japan, to William and Mitsue (Sasaki) Bilderback. Patricia was married to her High School sweetheart, Richard P. Campbell, in Riverside, California, on October 23, 1971. They were married for 27-years and remained wonderful friends. They had two beautiful children, Celeste Leimomi and Patrick Aaron. Patricia was extremely talented and danced the Tahitian, Maori, and Hawaiian hula exquisitely with several Hawaiian performers. She also had a love of art and enjoyed drawing. Patricia took every opportunity to expand her knowledge of several subjects, sharing that passion with her children and grandchildren. She followed the Buddhist faith and was an active member of the Soka Gakkai International. Patricia was a very loving sister, mother, grandmother, and friend. She is survived by her 2 brothers: Mark Bilderback and William (Bill) Bilderback; a daughter: Celeste L. Kegley and husband Wayne A. Kegley of Rome, NY; a son Patrick A. Campbell and wife Jennifer K. Campbell of Eagle Mountain, UT ; 5 grandchildren: Ethan (8), Keagan (6), Mason (6), Molly (3), and Kainoa (1). She is preceded in death by her parents William and Mitsue Bilderback. Memorial Services will be held at the Soka Gakkai International (SGI)-USA Utah Buddhist Center, located at 231 East 400 South in Salt Lake City on Saturday, December 28th at 11:00 am. Please share memories and condolences at www.serenicarefuneralhome.com. Services under the direction of Peni T. Malohifo’ou of Serenity Funeral Home, Draper, Utah

The family of Patricia Louise Bilderback created this Life Tributes page to make it easy to share your memories.