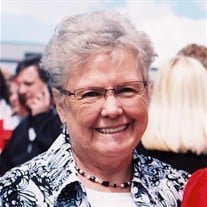 Patricia Louise Martin, loving wife, mother, daughter, sister, grandmother, great grandmother, and friend passed away surrounded by her family on July 27, 2018, from complications due to heart surgery. Pat was born December 31, 1934, in Pocatello, Idaho to Henry Lloyd Day and Virginia Erickson Day. She attended Pocatello High School where she graduated in 1953, and also went on to attend Idaho State University. While in high school, she met Lowell Frank Havlicak. They married on February 19, 1953. They had five children: Cynthia Louise Havlicek, Lisa Gaye (Brad) Ralphs, Jeffrey Lowell Havlicak, Randall Lynn (Brenda) Havlicak, Karina Havlicak (Scott) Carson. She also had 20 grandchildren and 16 great grandchildren. She is proceeded in death by her parents, her husband, Jim and her brother Robert Lloyd Day. She is survived by her children and sisters, Darlene Rognstad of Pocatello, Idaho, and Diana (Adrian) Kole of Dayton, Nevada. Pat raised her family on a farm in Rockland, Idaho. When the family moved to Pocatello, Idaho, she worked at many different retail positions. She later moved to Salt Lake City, Utah and married James Earnest Martin in the Salt Lake City Temple. She became a part of the lives of Jim's children, Mary Ann Martin and Andrew James Martin. While living in Salt Lake City, Pat worked many years as a medical receptionist at Old Farm medical offices from which she retired. Pat served as a temple worker in the LDS Jordan River Temple and in the LDS St. George Temple. She served in numerous leadership positions in her church throughout her life. Her greatest joy in life was spending time with her family members and in making and enjoying time spent with her many friends. Pat was an avid reader. She loved her Utah Jazz and never missed watching any major sporting event. She enjoyed playing Words with Friends. She moved frequently due to her love of finding and decorating homes in Idaho, Utah, and Nevada. Many homes she lived in had a pink room. Pat was a great cook -- famous for her gravy, cookies, banana bread, homemade bread, and her Sunday roast dinners. She loved shopping, traveling, and "running errands". She loved her friend groups -- the M&M's and The Girls in the Hood. These friends meant a lot to her and brought her much joy. Pat lived a life of service to family and others and made friends everywhere she lived. Funeral services will be held on Tuesday July 31, 2018, at 11:00 am at Crescent 16th Ward building at 275 East, 10600 South Sandy, Utah. The viewing will begin at 9:30 am.

The family of Patricia Louise Martin created this Life Tributes page to make it easy to share your memories.