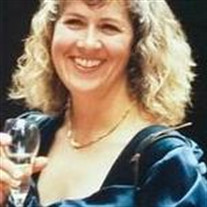 Patricia Eileen Potempa, 58, of American Fork, Utah, died January 27th, 2018. She was born in Melrose Park, Illinois, and is the tenth child of John and Helen (Goodrich) Collins. Pat was educated at St. Celestine grammar school in Elmwood Park, Illinois. She then attended Elmwood Park High School where she graduated Valedictorian. After high school Pat attended the University of Illinois Urbana-Champaign where she graduated with a Bachelor’s Degree in Accounting. In 1983 she was married to Jeffry J. Potempa at St. Celestine in Elmwood Park, Illinois. They had three children together. Pat was employed by IM Flash Technologies as the Senior Financial Accounting Lead from March 2006 to January 2018, and had continued to work until her final days. Prior to moving to Utah in 2001, Pat was a Controller at Glacial Lake Cranberries in Wisconsin Rapids, Wisconsin. While in Wisconsin, Pat volunteered numerous hours each year to the Girl Scouts Board of Directors, United Way, Wisconsin Rapids Youth Hockey, and was an active member at Sacred Heart Parish. While in Utah she continued to volunteer her time to the hockey community in Provo, Utah, and her involvement in St. Peters Catholic Church. She leaves behind her beloved husband Jeff who has been her best friend, companion, and Harley partner for 34 years. Pat was a strong believer in education, and wanting to help people in any way she possibly could by being a contributing member of society. Funeral arrangements have been made at St. Peters Catholic Church, 634 Caveman Blvd, American Fork, UT 84003. A viewing will be held at St. Peters Friday, February 2nd from 6-8 p.m., and a viewing prior to the Funeral Mass Saturday from 12-1:15 p.m., then a Rosary Service from 1:15-1:30 p.m. Mass begins at 1:30 p.m., and will be immediately followed with a luncheon at the St. Peter’s Dowling Center. In lieu of flowers, please make donations to St. Celestine’s Catholic School, 3017 N. 77th Ave, Elmwood Park, IL 60707 – In Care Of: Patricia Eileen Potempa (Collins) 1974.

The family of Patricia Eileen Potempa created this Life Tributes page to make it easy to share your memories.