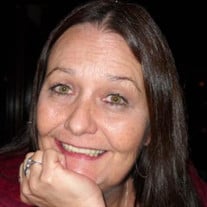 Patsy “Lorraine” Hanning 01.04.57 – 8.28.21 SLC, UT—Patsy “Lorraine” Hanning, age 64, passed away peacefully the afternoon of August 28th, 2021, in Sandy, Utah. Lorraine was born, the eldest of nine children, in Salt Lake City, Utah on January 4, 1957. She was raised in Coalville, Utah by her paternal grandparents, Joseph W. and Dora (Caldwell) Turner. Lorraine learned at an early age that genetics might not be in her favor because her grandmother had a BRAC2 gene mutation and Holt-Oram Syndrome; Dora died from Breast Cancer. Lorraine was a 3 time Breast Cancer Survivor, and had been in remission for Fallopian-Tube Cancer after having a hysterectomy. Courageously winning those battles and defying the odds, she inevitably lost her battle with Fallopian-Tube/Ovarian Cancer. Her body was tired without strength to fight, she surrendered as her spirit was heaven sent. Lorraine was raised LDS, but born a free spirit, living a colorful life filled with countless struggles and without regrets. At age 16 she moved out, dropped out, married Dale Kelly (later divorced), and started her first job as a waitress at Sambo's Restaurant on North Temple. To that marriage Felissa Lorraine Kelly was born February 9,1976. Lorraine’s second marriage was to Ron Hallman (later divorced), and to this marriage was born Tyson B Hallman, April 11, 1980. Later in life Lorraine moved to Montana. There she met her 3rd husband, Frank C. Hanning III (later divorced). Together they built a life while finishing a beautiful cabin in Darby, Montana, living happily for 11 years. And even though she was a single parent, she obtained her GED and Clerical Training skills which she used throughout her life working as a substitute teacher, teachers aide, CNA, and her go to job as a bartender. Lorraine was admired for her creative talents. She enjoyed drawing, painting, wood burning, ceramics, beading and leather work. Celebrating her Native American culture she made beautiful dream catchers. She was also a gifted crocheter and won several first place ribbons at the Utah State Fair throughout her life. Outside the craft room, she loved the outdoors, camping with friends or fishing with her brother Buddy. Lorraine is survived by her mother, Patsy (Oliver) Lassche, her stepfather, George Lassche, and her siblings: Beverly Geer, Kenneth Lassche, Georgina Haertel, Kevin Lassche, Valorie Bouton, and Steven Lassche. Lorraine is also survived by her loving daughter, Felissa Lorraine Kelly, who was her companion and caretaker for several years in Oregon and Utah, and Felissa’s fur-babies Whitley, Riley Rain (puppy), and Haley Bailey (cat) all of whom she loved dearly. My friend and mom; We loved spending hours on the phone when we were apart, I was her one n’only “baby girl”. She is also survived by her son Tyson B Hallman and his children Mariah Blu, and Serenity, of Great Falls, Montana. She is preceded in death by her father Eugene B Turner, her sister Sheila Rae Grinnell, and brother Buddy Gene Turner. Lorraine’s connection with God, her daughter and her friends, kept her optimistic and determined to live a full life. She was an unconditional loving and compassionate friend to all who knew her and she will be sadly missed. — Thank you to all who have traveled far and near to pay tribute my beautiful Mom, Rainy. Memories should never be perishable, so for those who wish to make a donation towards funeral costs there will be a Facebook Fundraiser & GoFundMe accounts setup in Lorraine’s name. “I Miss You” A little bit of you And a little bit of me, Have switched respective places In a mystifying “We”. When the miles come between us And our lives are drawn apart, Our thoughts remain together Tugging softly at the heart. This loneliness without you Tells of special moments shared, And says across the miles Just how much we’ve always cared. The emptiness that comes With the memory of your touch Stirs a feeling from within that says, “I miss you very much” -Bruce B. Wilmer Patsy “Lorraine” Hanning January 4, 1957 ~ August 28, 2021 Graveside Service September 11, 2021 Redwood Memorial Cemetery 6500 S. Redwood Rd. West Jordan, Utah Presiding & Conducting: Bishop John Bruderer Opening Prayer: Sandra Houlihan Song: Richard Weeks “I Need Thee Every Hour” Tribute & Memories: Felissa Kelly (daughter), Bev Geer (sister), Patsy Lassche (mother), Mike Anderson (nephew) Open Mic Memories: Guests Closing Remarks: Bishop Bruderer Song: Richard Weeks “How Great Thou Art” Closing Prayer: Bishop Bruderer Dedication of the Gravesite: Bishop Bruderer A special thanks to her oncology team, the staff at Sandy Health & Rehab, and the crew at Bristol Hospice (Jen-RN & Alan-SW). I’d also like to give recognition to Serenity Mortuary and Redwood Memorial Cemetery for handling my mother with respect. On Saturday October 2nd, 2021, from 2pm-7pm, Felissa Kelly will host a “Celebratory Wake & Release” in Lorraine’s honor and fulfilling her last wishes at Mirror Lake (site still to be determined).

The family of Patsy "Lorraine" Hanning created this Life Tributes page to make it easy to share your memories.