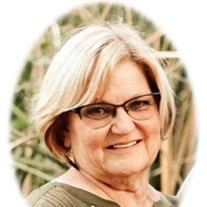 Patti Lyn Sullivan Ault returned home to heaven on November 20, 2020 at the age of 62. Over the last twelve years she battled a rare cancer called spindle cell sarcoma. She is best remembered as a passionate person for her faith in and testimony... View Obituary & Service Information

The family of Patti Lyn Sullivan Ault created this Life Tributes page to make it easy to share your memories.