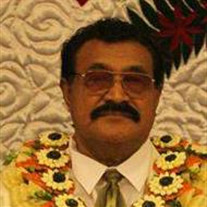 Our beloved father and grandfather, Paula Katoa, 74, passed away on December 15, 2014, in American Fork, Utah. He was born January 14, 1940, in The Kingdom of Tonga to goodly parents Kakapu Semisi Katoa and Suliana Fatai Fatafehi. He was sealed for time and all eternity to the late Melesiu Leka in Tongatapu. After the passing of his precious wife, Melesiu, in 2004, he remarried to Ovalata Vaioleti. Paula Katoa was a blessing and a courageous leader to all he came across throughout his life. The legacy he leaves on earth is one that will never be forgotten and will continue with him through the eternities. While still residing in Tonga, Paula served his community as a police officer and also attended the New Zealand Army School. He also had the opportunity to serve as a branch president in his home village of Ha’utu, as he used his many strengthens to build the Kingdom of God on earth while still in Tonga. As he took the leap of faith and journeyed to America, Paula would become a much respected pioneer and tool in helping many families’ to live the same “American dream” that he had for his own family. Residing in Salt Lake City, Paula Katoa would be known as one of the great Tongan pioneers and developed an outstanding entrepreneurial and compassionate dedication that would allow him to accomplish the unknown. Paula and his family later journeyed to Euless, Texas where he continued to dream and pave a path for the Tongan community. He, once again, worked for the police department for the City of Euless and continued to serve his community as a fearless leader. Paula also again served as a branch President for the 1st Tongan Branch in Texas. He later became the first Bishop for the first established Tongan Ward in Euless, Texas. Paula Katoa is a respected man known by many including city officials, community leaders and members of his faith as well as other faiths. Paula was a man of faith who continued to put his trust in the Lord and stood firm in what he knew to be true. The influence and impact he has had in the lives of many individuals is too overwhelming to put in to words. As he has finished his work on this earth he leaves to the other side having obtained much knowledge, numerous accomplishments, and a growing prosperity of those who view him as a hero. The ultimate role that Paula fulfilled was the role of our father and grandfather/great grandfather. Though he has physically left our presence, the lessons he taught, wisdom he shared, memories he created and support and love he gave will remain in our hearts and souls to continue to drive us to fulfill the dream of our humble, charitable, courageous, Christ-like father/grandfather, Paula Katoa. Survived by: Wife Ovalata Vaioleti, 2 Sisters Tapenisi Falahola and Salote Fonua, 2 Brothers Sione and Inoke, 4 sons Montiveti (Janelle), Fotu (Elizabeth), Lopini (Olivia) and Samiu (Angie), 26 grandchildren, 5 great-grandchildren and many others who he loved as a father/grandfather Preceded in death by: Parents Kakapu Semisi Katoa and Suliana Fatai Fatafehi, Wife Melesiu Leka, Son Lynn Katoa, grandson Paul Katoa Jr, and 5 brothers Vili Oto, Mounga Fua, Molitoni Paka, Sioeli Katoa,and Loseli Katoa Funeral Services will go as follows: Sunday December 21, 2014: 5-10 pm Family viewing @ LDS Church 1148 W 500 N. SLC, UT Monday December 22, 2014: 5-10 pm Community viewing @ Salt Lake Cannon Stake Center 934 W. Fremont Ave . Tuesday December 23, 2014: 8-11am final family viewing, 11-12pm Bishop’s program (location the same as Monday night) followed by burial at Memorial Estates (6500 S Redwood Rd.) Services are under the direction of Peni Malohifo;ou of Serenity Funeral Home Thank you for the love, care and support you have shown to our father/grandfather . Please share memories and condolences at www.serenityfhs.com

Our beloved father and grandfather, Paula Katoa, 74, passed away on December 15, 2014, in American Fork, Utah. He was born January 14, 1940, in The Kingdom of Tonga to goodly parents Kakapu Semisi Katoa and Suliana Fatai Fatafehi. He was sealed... View Obituary & Service Information

The family of Paula Katoa created this Life Tributes page to make it easy to share your memories.

Our beloved father and grandfather, Paula Katoa, 74, passed away...