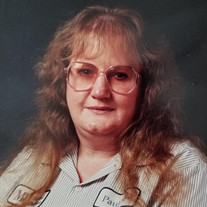 Pauline Marie Reese Bushman After struggling through many months of declining health, Pauline finally breathed her last breath just past midnight on February 4th, 2017. Mercifully, she passed quietly in her sleep. Pauline was 69 years old having been born on 27 April,1947 in Glendale, L.A. Co., Calif. Most of her early life, Pauline lived in Orderville, Utah, a small community where everyone knew everyone else and very likely was related to them as well. She recalled that their home lacked indoor plumbing for many years until her Grandfather came to live with them. At that time her father upgraded the home with a modern bathroom and other niceties. Television reception was poor in their little valley so children were left to their own imaginations to create entertainment. Pauline often tended her younger sister and brothers, sometimes riding their family horse, Pancho Villa. She could mount 3 or 4 little kids on ol’ Pancho and ride around the farm. Pauline wanted to be a mother, even in those early years. When Pauline was old enough to enter high school the family moved up to Utah County where her father could find better employment. They were able to buy a home in Mapleton, move in, and start a new life. Pauline was amazed at the larger towns in Utah County and all those strangers. However, she was well accepted and found new friends in the local Church as well as Springville High. Pauline went to work soon after graduation and then came marriage. This marriage didn’t last too long but they had a fine son, Tommy, who blessed her life. She married again, this time to Boyd Roper, and they had 4 children, 2 girls and 2 boys. Throughout this time in her life, Pauline continued to work at various jobs in the county. She spent considerable time at Nature’s Way in Springville and also worked for years at Fritzies sewing plant in Spanish Fork. Late in life Pauline married one last time. Vaughn A. Bushman became her eternal companion as they were sealed in the Provo Temple. This marriage was happy and she and Vaughn were able to travel and have some fun years before her health declined. Pauline always loved children and especially babies. Nothing made her happier than to hold and tend a small baby. She would just blossom out in love and happiness. Most of her Church callings dealt with teaching young children and Pauline was right at home with those little kids. Pauline is very gifted with her hands and at an early age learned valued skills from her Grandmother and others. She became quite proficient in crochet work with yarn making small Afghans, baby booties, bonnets, and the like. She also took up picture painting with water colors, doing landscapes, sunsets, old barns, seascapes, and others. These projects gave her a lot of joy in her last years. Pauline is proceeded in death by her parents, Aaron Allen Reese & Iris Rose Cox, grandparents, and her oldest son, Tommy, Survivors are her husband, Vaughn A. Bushman, a sister, Pat Miner, 3 brothers, Charlie (Karen), Bill (Lori Ann), Hyrum (Lori); and 12 grandchildren. Services for Pauline will take place at the Church located at 989 So. 2550 E., Spanish Fork, Utah, at 12:00 noon on Feb 11. A viewing will begin that day and place at 10:00am. Share condolences at www.serenityfhs.com

The family of Pauline Marie Bushman created this Life Tributes page to make it easy to share your memories.

After struggling through many months...