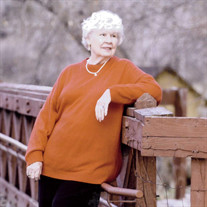 Pauline “Polly” Pritchett passed away on December 29, 2019 in West Jordan, UT. Polly was born in September 1935 in Rock, LA to James and Edith Martin. She married Charles Rountree in December 1954, later divorced. She married George Pritchett in November 2002. Her family moved to Ajo, Arizona when she was young and many years later she moved her family to Utah. Polly loved music, singing, and meeting and talking to people. She loved to travel and was an over-the-road truck driver for a few years. She loved to knit and crochet afghans and gave most of her creations to others. She was a member of the Church of Jesus Christ of Latter-Day Saints and was also a member of the Fraternal Order of Eagles. Polly is survived by: brother Victor (Jan) Martin; sisters JoJo Groves, Kitty Burford, MaryAnn (Mike) Oliveira; children, Phillip (Rena) Rountree of CA, Vikki Funk of KS, Kevin (Christina) Rountree of UT, Lisa Rountree of UT, Von Rountree of UT, Noble (Stacey) Rountree of UT, 13 grandchildren, 6 great-grandchildren, and many nieces and nephews. She is preceded in death by her parents, husband, three brothers, one sister, and one son. The family would like to thank One Care Home Health & Hospice for their kindness and wonderful care of her for the past several months.

The family of Pauline "Pollly" Pritchett created this Life Tributes page to make it easy to share your memories.