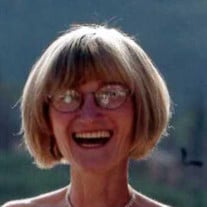 Peggy Lorraine Langner passed away peacefully surrounded by her family on Sunday evening, June 28, 2015, following a courageous battle with lymphoma. Peggy was born to Ivan and Hazel (Fluth) Langner on April 10, 1950 in Emery, South Dakota. Peggy was the middle of 3 children and grew up on a farm where she learned the value of hard work. She loved animals and had a variety of pets throughout her life, including a pet chicken when she was a child. Peggy graduated from Emery High School and went on to hold jobs in many different fields over the years. Two of Peggy’s favorite jobs, where she made many lasting friendships, included working for Challenger Freight Company in Irving, Texas and Intermountain Mortgage Company here in Salt Lake City. Peggy married and had two children, Harvey Loyd Carmichael and Gloria Ellen Morton. Peggy’s pride and joy in this life was her family. Peggy loved her family unconditionally and was very proud of Harvey and Gloria and all of their many accomplishments. Peggy also loved spending time with her grandchildren. Peggy’s grandchildren enjoyed the benefits of her chauffeur services for many years and loved swimming and hanging out with grandma at her house. Peggy loved her brother Richard and sister Debbie and received a special blessing of being able to enjoy this past year with her sister as her neighbor, having recently moved to Salt Lake City last July. Peggy enjoyed traveling throughout the United States and especially loved the many beach vacations she took with her family to Hawaii and the Caribbean. Peggy was kind to everyone and will be terribly missed by all. Peggy was taken from us way too soon, but we take comfort in knowing that she is no longer suffering and is most definitely experiencing a joyful reunion with her parents. Peggy was preceded in death by her parents Ivan and Hazel (Fluth) Langner. She is survived by her brother Richard Langer of Sioux Falls, South Dakota, her sister Debbie Graves (Rob Adams) of Salt Lake City, Utah, her children Harvey Loyd Carmichael (Jackie) and Gloria Ellen Morton also of Salt Lake City, Utah and her 4 grandchildren, Alexander Joseph Walker, Julian Carmichael, Benjamin Loyd Walker and Hudson Nicole Carmichael. She also leaves behind her fat, naughty cat, “Bandit,” who adored her and will miss her terribly, especially since he truly despises everyone else! Funeral Services will be held on Wednesday, July 1 at the Butler Stake Center, 7035 Nutree Drive, SLC, Utah at 4:00 p.m. A viewing will take place 2 hours prior to the funeral from 2:00-4:00 p.m. at the same location. Funeral Services will be handled by Serenity Funeral Home of Draper, Utah (801) 255-2801.

The family of Peggy Lorraine Langner created this Life Tributes page to make it easy to share your memories.

Peggy Lorraine Langner passed away peacefully surrounded by her...