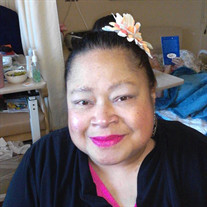 PELENITA KATINA KATOA Pelenita Katina Katoa, 46, our beloved daughter, sister, aunty and amazing friend returned to our Father in Heaven Monday the 9th of September, 2014 in Bountiful, UT. Pelenita Katina Katoa was born 18 August, 1968 in Nuku’alofa, Tonga to Sione Hia Katoa and Sisilia Laukau Moa. Known by family as ‘Ta’ and ‘Katina’ by all her friends, was a dedicated and devoted servant of The Church of Jesus Christ of Latter-day Saints, a faithful member of the Val Verda 7th Branch, she served as the ‘Greeter’ welcoming all with a smile. Ta, hastened the work of the Lord by being the ‘Missionary’ at the Life Care Center in Bountiful. She would always take time out to share and spread the gospel through her powerful testimony with whomever was willing to listen. Ta, was a loyal and true friend and was loved by all who came to know her, often referred to being ‘lovely and lively’ at the LCCB. Ta, loved her family unconditionally and had the great privilege to live and be raised by many people in her family and touch their lives. Though Ta never had children of her own she loved to brag about her nieces and nephews. Ta was a very independent person, but never strayed too far from her father, often reminding everyone that she was dads ‘Pele’. Pelenita is survived by her father, Sione Hia Katoa, Sisters Otufangavalu (Maveni) Angilau and Tapenisi Katoa. Nieces and nephews Tolina (Taniela) Tausinga, Naisa Angilau, Inoke (Kalolaine) Angilau, Siola’a (Tipiloma) Nau, Sione Angilau, Vilisoni Angilau, Atunaisa Havili, Alani Loseli Havili and Sitiveni Havili. Great nephews and nieces, many aunts/mothers, uncles/fathers and cousins/brother and sisters. She is preceded in death by her mother Sisilia Laukau Moa, step mother JoDeane Riley Katoa, all grandparents and her nephew Siale Maveni Angilau. Funeral services will be held Monday, 15 September, 2014 at 11 a.m., at the Val Verda Stake Center, 2600 South 500 West, Bountiful. Family and friends may call Sunday evening at the Val Verda Stake Center from 6-10 p.m. We would like to extend a special thank you to the Life Care Center of Bountiful for taking such great and loving care of our beloved Katina and to our wonderful Lavulo family that never tired of the phone calls and would drop everything to be by her side. Services are under the direction of Peni Malohifo'ou of Serenity Funeral Home Ta you will be forever with us and we love you more than words can say, until we meet again. We love you!

The family of Pelenita Katina Katoa created this Life Tributes page to make it easy to share your memories.