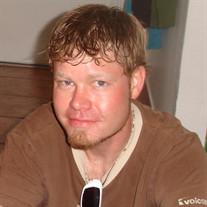 Preston James Bassett It is with deep sadness that we announce the passing of our son, Preston. He slipped from this world on December 11, 2017, while camping near San Diego, California. We will miss his sweet smile, his tender ways, his most generous heart, and warm spirit. He is an important part of our family and we will miss him everyday. We receive comfort knowing he is reunited with his father, Doug, brother, Boyd, and sister, Fern, all of whom preceded him in death. We will be holding a graveside service on December 30 at 11:00 am at the Mona City Cemetery. The event is open to all family and friends. Thank you to all those who have reached out and loved us at this tender time. It means the world to us. Much love, Arlene and Family. Preston James Bassett graced this world on his mother's birthday, July, 9, 1977, in Provo, Utah. He was the second of nine children born to Keith Douglas Bassett and Arlene Chapman Bassett. From his earliest years Preston was a curious child. He loved exploring and creating adventures in the outdoors and that passion continued throughout his life; he was truly a free spirit. Those who knew Preston best would tell you that he was both gentle and giving. His quiet ways made him easy to be around. Even in his early years he watched out for others. When he was only eight he spied a homeless man on the street and asked his Dad if they could get some food for him. After a quick trip to Arctic Circle, Preston delivered the warm hamburgers and fries to the man and spent some time visiting with him. Another example of Preston’s generous heart occurred when he was in fifth grade and noticed a younger boy being harassed by a group of children on the way home from school. Preston made a point to walk the boy home for several weeks afterward so the child would feel safe. He was considered a good friend to all those who had association with him. Through the years Preston's generosity was a hallmark of his life. He often insisted on paying for meals and hotels on family excursions and holidays. It was important to him to show his love this way. When he was sixteen he was in a car accident where he suffered a serious brain injury. Both he and his brother Jacob were injured, yet he insisted on helping to lift the van off of his sibling before being transported to the hospital for his own injuries. Part of Preston's recovery required him to have a full six weeks of laying completely flat with little or no movement. Often unknown even to those that loved him he suffered with the repercussions of those injuries throughout his lifetime. He developed CTE and spent many years coping with the difficulties associated with brain disruptions. This intensified over the last five years, which enhanced even further his compassion for others. In 1997 Preston became a father to a beautiful little boy named Kyle, who was always in his heart. While he sometimes watched from afar, he always watched and cared with love. Preston was an electrician by trade for many years and was a hard worker. He made his home in Salina, Utah. Preston loved to travel and see places and have new experiences. He loved the beauty surrounding the places he visited which included Spain, Hawaii, the Caribbean Islands, and South America. His travels also included numerous road trips in his camper across the United States. He is survived by his mother Arlene Bassett, his siblings Spencer (Nancy), Aubrey (Jacob) Carter, Blaine (Krystle), Jacob, Joanna, and Nate. He is also survived by his son Kyle as well as two grandmothers. He was preceded in death by his father, older brother, Boyd, and younger sister, Fern. There will be a graveside service held in his honor on December 30th at 11:00 am in the: Mona City Cemetery 700 East Cemetery Lane Mona, Utah 84645

Preston James Bassett It is with deep sadness that we announce the passing of our son, Preston. He slipped from this world on December 11, 2017, while camping near San Diego, California. We will miss his sweet smile, his tender ways, his most... View Obituary & Service Information

The family of Preston James Bassett created this Life Tributes page to make it easy to share your memories.

Preston James Bassett
It is with deep sadness that we announce...