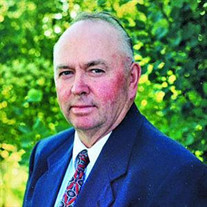 Quinn William Bailey passed away at his home after a short illness on January 6, 2016. Quinn was born February 6, 1933 in Ogden, Utah, to William Lysle and Viola Chard Bailey. He grew up on the family farm in Liberty, Utah. He graduated from Weber High School in 1951 and served in the army from 1953 to 1955. Quinn married Patsy Johansen September 18, 1953, in the Salt Lake Temple. After serving in the military he started his own dairy farm in Liberty Utah. He loved the valley and it was always home. They moved to Rupert, Idaho on June 1, 1971 where he bought a dairy farm. He was an active member of the Church of Jesus Christ of Latter-day Saints and served in many leadership positions. Later they served a church welfare and membership reactivation mission in Huntsville and Ogden Utah. They also served ten years in the Logan and Twin Falls Temple. Quinn loved his dairy farm and farming with Allis-Chalmers tractors. He also loved coaching, playing, and watching his grandchildren compete in basketball. His most prized possession was his family. He is survived by his wife of 62 years, Patsy and his children: Roger (Karen) Bailey of Liberty Utah; Robyn (Darrell) Noble of Rupert Idaho; Calvin (DeAnn) Bailey of Rupert Idaho; Carl (Stephanie) Bailey of Rupert, Idaho; and Ken (Traci) Bailey of Hyrum, Utah; 26 grandchildren and 38 great-grandchildren. Also surviving are three brothers: Larry (Gerry), Eugene (Ruth), Sherman (Juana), sister-in-law Jean Bailey, and his aunt Bernice Merrill. He was preceded in death by his parents, brother J.C. Bailey, and sister-in-law Edith Bailey. The viewing will be held Friday, January 8th from 6:00 to 8:00 pm at the Acequia LDS chapel as well as an hour prior to the funeral. The funeral will be held 11:00 am on Saturday, January 9th, at the Acequia LDS chapel. A memorial service will also be held Monday, January 11th, at 11:00 am at the Liberty First Ward chapel in Liberty, Utah. He will be buried in the Liberty Utah cemetery after the memorial service on Monday. Services are under the direction of Serenity Funeral Home of Utah 801-599-5220

Quinn William Bailey passed away at his home after a short illness on January 6, 2016. Quinn was born February 6, 1933 in Ogden, Utah, to William Lysle and Viola Chard Bailey. He grew up on the family farm in Liberty, Utah. He graduated from... View Obituary & Service Information

The family of Quinn William Bailey created this Life Tributes page to make it easy to share your memories.

Quinn William Bailey passed away at his home after a short illness...