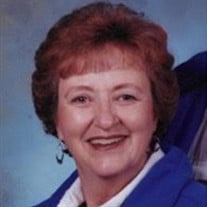 Rachelle “Kelly” Anderson Rowley of Riverton, Utah left her loving family to return to her heavenly family after a prolonged illness, on February 20, 2021. Kelly was born on February 11, 1940 in Cleveland, Utah, to Floyd Wilson Anderson and Rosanna Richards Anderson. She was the youngest of seven girls. She married the love of her life, Howard Darry Rowley on August 22nd, 1959 in Cleveland, Utah. Their marriage was later solemnized in the Manti Temple. Kelly graduated from Cosmetology school shortly after marriage, then worked for many years in their family owned business. Later, she worked at Zions Bank in the Commercial Loan Department until her retirement. Kelly and Howard had a family and built a wonderful life together. They enjoyed 61 years of love and laughter. Kelly was the best wife, mother, and grandmother. She was the most full of love, understanding, funny, quick witted, always knowing how to help, best friend, kind of woman. She loved us all endlessly and we returned that love. She was happiest spending time with her family, boating, camping, or barbequing in the backyard. She is survived by her loving husband Howard Darry Rowley, Riverton; her children Michelle (David) Ford of South Jordan, Todd D. Rowley of West Jordan, Troy H. Rowley (Carol Evans) of Riverton; five grandchildren and three great grandchildren. She was preceded in death by her parents Floyd Wilson Anderson and Rosanna Richards Anderson, and sisters Margaret Christensen, Ramona Jensen, Ona Hunt, Berlyle Kochevar, Connie Ronan, and Janet Anderson. Funeral services will be held Monday, March 1st, 2021, at 11:00am, The Church of Jesus Christ of Latter-day Saints located at 12070 South Laurel Chase Drive, Riverton, Utah. Visitation will be held from 10:00 to 10:45am prior to service. Graveside service will follow at the Huntington City Cemetery, Huntington, Utah. The family would like to thank Good Shepherd Hospice for the care and comfort they provided. Kelly will be greatly missed by all who knew and loved her.

Rachelle &#8220;Kelly&#8221; Anderson Rowley of Riverton, Utah left her loving family to return to her heavenly family after a prolonged illness, on February 20, 2021. Kelly was born on February 11, 1940 in Cleveland, Utah, to Floyd Wilson Anderson... View Obituary & Service Information

The family of Rachelle "Kelly" Anderson Rowley created this Life Tributes page to make it easy to share your memories.