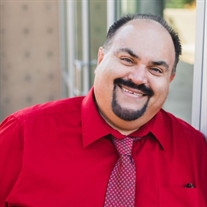 One month before his 52nd birthday, Ralph Delgado went home to be with the Lord after a sudden heart attack. Born in Mexico City, Ralph was 11 when he immigrated to the US. His parents joined relatives in California, where they sought a better life for their three children. The best thing that happened was that his mother attended a Christian church and learned that Jesus paid the penalty for sins when He died and rose again. As John 3:15-17 states, his mother believed Jesus’ promise of eternal life to everyone who puts their faith in Him, and she helped Ralph do the same in 1982 in South Gate, CA. After high school, Ralph earned an AA Degree in Computer Information System Analysis and later earned a BS in Business Management, as well as his MBA in 2014. He married Jessica Diaz on July 21, 2001, and they honeymooned on an Alaskan Cruise. Ralph worked for various business and computer firms and was a Proven Senior Product Manager at Regions Bank most recently. However, he always considered his greatest responsibility and achievement to be raising his children: Nathaniel born in 2004, Adrian born in 2009, and Victoria Aurora born in 2011. Besides his wife and children, the most important relationship in Ralph’s life was his Lord and Savior Jesus Christ. His love for the Lord was evident in how he cared for his family and friends, his integrity on the job, and his willingness to minister wherever needed, especially at church. A member of Midvalley Bible Church, Ralph served as a deacon, web master, AWANA children’s ministry leader, and shared God’s Word at the Rescue Mission. His favorite Bible verse was Jeremiah 29:11. He loved to read, and enjoyed mystery novels, often reading a book in a week. His favorite team was the 49ers, which he enjoyed watching on TV, along with the Mexican Soccer League and attending RSL games in SLC. He was a terrific problem-solver and taught himself home and car repairs by watching YouTube. If anyone commented on how smart he was, he said, “I know…I married Jessica.” Ralph is survived by his wife and two sons and a daughter, his brother Ernesto (Sheri Ratliff) Delgado and sister, Berenice Hernandes-Halpin (Gene Halpin), and nieces and a nephew. Preceded in death by his parents, Ernesto Andres Delgado Becerra and Maria Antonienta Esperon Aburto, and his brother-in-law, Javier Diaz. A memorial service will be held at Midvalley Bible Church in Bluffdale, Utah, on January 15 at 10:30 AM In Ralph’s memory, donations may be made to “GoFundMe Ralph Delgado’s memorial and funeral.” You may share your thoughts at https://www.facebook.com/memorialservice.ralphdelgado/ This service will be available through Midvalley Bible Church's YouTube channel at 10:30AM. This service will be bilingual. Whenever Ralph was asked how he was doing, he would always reply, “It’s a beautiful day in Paradise.” By that he meant his spiritual health. And now he’s having a beautiful day.

One month before his 52nd birthday, Ralph Delgado went home to be with the Lord after a sudden heart attack. Born in Mexico City, Ralph was 11 when he immigrated to the US. His parents joined relatives in California, where they sought a better... View Obituary & Service Information

The family of Rafael Delgado Esperon created this Life Tributes page to make it easy to share your memories.

One month before his 52nd birthday, Ralph Delgado went home to...