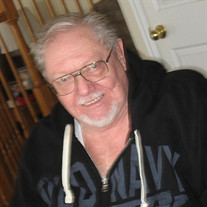 Pat was one-of-a-kind. He left us very quickly on Wednesday, Dec. 2 at the Central Utah Veterans Home in Payson — so fast that we were left wondering how this could be real. Ralph Patrick Rose Jr. — Pat to everyone who knew him — was born Aug. 21, 1940 to June Cowan and Ralph Patrick Rose Sr. He married Carol Butterfield, and together they had five daughters before divorcing. He married Ann Robinson in 1974, and together they have four children. He lived in Salt Lake City and Lehi. Pat served 10 years in the U.S. Navy during the Vietnam War, and held many jobs over the years — he was a police officer, mechanic at Hill Air Force Base and even once served as a body guard to then-California governor Ronald Reagan — before finally retiring from the U.S. Postal Service. He earned a bachelor's degree in sociology, criminology and correctional treatment from the University of Utah. He loved to regale family, friends and strangers with tales of his time in the Navy and his injuries, often starting sentences with "I've been shot, stabbed... ." He lived through many injuries and accidents, a heart attack and quintuple bypass, fused spine and joint replacements, but in the end it was dementia that took his life. We sat around his bedside in the hours after his passing, telling funny stories about Pat and remembering the good times. There was the time he thought it was a good idea to put on a winter parka and attempt to kill a hive of active wasps on a hot summer afternoon — then we watched behind a glass door as he ran around the yard ripping off his clothes to get the wasps out, because a parka isn't good sting protection. He was never careful when he sat down, and regularly flipped himself and the chair to the ground, a move we dubbed "the full Ralph." Once he took out a full canopy with him. He loved his wife. He loved to explore the Utah desert and ghost towns. He loved caffeine-free Diet Coke, Hostess fruit pies, strawberry shakes and anything Little Debbie. He's survived by his loving wife Ann who took such good care of him for 41 years, eight daughters — Tammy Rose, Heidi (Ken) Cox, Robyn Rose, Wendy (Miguel) Ojeda, Michelle (Mark) Thatcher, Amie (Mark) Bullard, Dianna (Nate) Brunson and Lynnsey (Rusty) Steele — one son, Theron Rose, 17 grandchildren and 10 great-grandchildren. He was preceded in death by his parents, his brother Mike and sister Sandy. Pat's viewing will be from 10 to 10:45 a.m. on Monday at the Lehi 1st Ward, 220 W. 200 South in Lehi. The funeral service will start at 11 a.m., with internment at the Lehi Cemetery. In lieu of flowers, please make a donation in Pat's name to the Disabled American Veterans at Support DAV Today! - Disabled American Veterans (DAV)

Pat was one-of-a-kind. He left us very quickly on Wednesday, Dec. 2 at the Central Utah Veterans Home in Payson &#8212; so fast that we were left wondering how this could be real. Ralph Patrick Rose Jr. &#8212; Pat to everyone who knew him... View Obituary & Service Information

The family of Ralph "Pat" Patrick Rose Jr. created this Life Tributes page to make it easy to share your memories.

Pat was one-of-a-kind. He left us very quickly on Wednesday,...