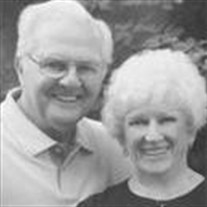 When visiting California, a young Ralph (Bob) Richey met and fell in love with the beautiful blue-eyed girl that became his eternal companion. He loved Rosalie Rae Hughes more than anything on this earth. They were married on September 23, 1949. For the two and a half years he outlived her, he carried her photo in his wallet and loved to show everyone the picture of his "Sweetheart."On Saturday, May 9th, 2015, surrounded by many loved ones, the Lord finally called home his servant Bob to be reunited with his "Sweetheart" and the love of his life. Bob was born November 27, 1929 in Kansas City, Missouri to Frederick William Richey and Grace Lucille Sweeten. Bob always considered Sandy, Utah his home, but he also spent many of his later years in St. George, Utah. Bob found beauty and wonder in the world of his creator. His children remember how often he would look towards the heavens and comment, "Look at those clouds! Wow!"Bob was a great provider for his family. He would work as many jobs as necessary to keep them comfortable and well fed. He possessed a strong work ethic and couldn't stand sitting still when there was something to be done.Bob was an accomplished jazz drummer; using the skills he honed while serving in the US Army Band.Bob loved his Lord and Savior, Jesus Christ. He served him selflessly for many years and he loved to share the joy that the gospel had brought to his life with others. He served for 11 years in the Jordan River LDS Temple and also served missions for his church in Nuku'alofa Tonga and at various historical sites in St. George, Utah.Bob had a way of making each of his grandchildren feel special and loved. He regularly wrote them letters; sending words of encouragement, support and scripture. Bob is survived by his 4 children: Ralph Richey Jr. (Leann), Kevin Richey (Kaye), Sue Ann Stringham (Bart), Jeffrey Richey, 17 grandchildren, 54 great grandchildren, his brothers William Richey and Chuck Richey. Bob was preceded in death by his parents, his "Sweetheart" Rosalie Rae Richey and their infant son Ronnie Richey. Funeral services will be held Friday, May 15th at 11:30 a.m. at the Holladay 27th Ward House, 5450 South Holladay Blvd. A viewing will be held prior to the service at the same location from 10:00 to 11:00 a.m. Interment will follow at the Sandy City Cemetery located at 700 East and 9000 South.

When visiting California, a young Ralph (Bob) Richey met and fell in love with the beautiful blue-eyed girl that became his eternal companion. He loved Rosalie Rae Hughes more than anything on this earth. They were married on September 23, 1949.... View Obituary & Service Information

The family of Ralph Robert Richey created this Life Tributes page to make it easy to share your memories.

When visiting California, a young Ralph (Bob) Richey met and...