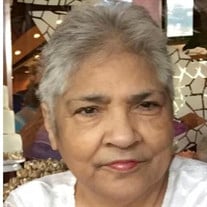 Ramona Dolores Gonzales, 68, passed away June 22, 2016 at home, surrounded by family. She was born August 19, 1947 in Oxnard, California to Antonio Gonzales and Gloria Ordonez Vasquez. She is preceded in death by her father, Antonio Gonzales; brothers, Robert Gomez, Jesse Gomez, and Raul Chavez. She is survived by her mother, Gloria Chavez (Raphael); daughters, Veronica Paz, Cindy Crane, and Lisa Crane; siblings, twin sister RoseMarie Blair, Raymond Gonzales, Gloria Villescaz, Salvador Gomez, Virginia Kadoguchi, Richard Guzman, Mary Alice Going, Maria Guadalupe (LUPE) Garcia, and Raphael Chavez; Mike Gonzales and brothers/sisters; Gonzales family of Oxnard, California; grandchildren, Richard Tobias, Roxanne Aguilar, Matthew Tobias, Brianna Caceres, and Jade Crane-Dyer. She was blessed with eight great-grandchildren. Dolores had a very giving heart. She was known as one who would give everything she had to help another; she fed the homeless in her local town of Santa Paula. Convalescent nursing was the career she chose, along with private nursing homecare. She worked in this field for 40+ years, and only gave her best, and expected nothing but the same from co-workers. Dolores loved to dance, also loved Mexican music! Team Palio was formed 3 years ago to honor her courageous fight as a breast cancer survivor. After recovery she continued to feed the homeless. She also loved socializing, and eating out. We love you. You will be dearly missed—from all the “chiefs” in the family. Thank you for being a good mother, aunt, grandma, and awesome sister! Special thanks to nurses and staff at Inspiration Hospice: Chaplain Mary, Shannon, Claudette, Nikki, and Roger. Our family appreciates all you did for Dolores. There will be a private memorial at her home in Salt Lake City, Utah. A second memorial service will be held in Santa Paula, California with family and friends.

Ramona Dolores Gonzales, 68, passed away June 22, 2016 at home, surrounded by family. She was born August 19, 1947 in Oxnard, California to Antonio Gonzales and Gloria Ordonez Vasquez. She is preceded in death by her father, Antonio Gonzales;... View Obituary & Service Information

The family of Ramona Dolores Gonzales created this Life Tributes page to make it easy to share your memories.