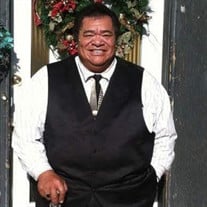 Raymond Lei Maumasi "Uncle Ray" of Taylorsville, Utah age 66 peacefully returned home Sunday October 29, 2017, 5:16pm at the hospital in Murray, Utah surrounded by his loved ones. Raymond was born October 8, 1951 in Apia, Western Samoa to Fuailefauaimaota Mareko Maumasi & Saumaonatoto Tuiletufuga. He was the third oldest of sixteen children. At a young age he was chosen to attend a school in New Zealand where he spent most of his childhood and his young adult life. Then in 1982 he came to the U.S. and lived out the remainder of his days. Raymond is survived by his wife Sita Kamarita Taateo, seven children, seventeen grandchildren, and a great granddaughter. Mark & Cyrena [Whitney(Eva), Raymon, Aquilar, Khadine], Angela & Richard (Mako, Merc, Manassah, Kroyde), Catherine & Bryan (Lauvadia, Kyane, Bronson), Leslie & Carla (Geneva), Analei & Laulu Mataava (Raymond, Daniel, Maybel Faalataina, Mataava Jr.), Mary and Mauricio (Sita-Maria), and Caroline. Also by his siblings, cousins, nephews, nieces and many friends. He is preceded in death by Mareko(father), Saumaonatoto(mother), Dawn Toast(sister), Visser(brother), Mareko II(brother), Warner(brother), Raymond Jr.(Son), and Esther Rachel(Daughter). Raymond was welcoming, warmhearted, loyal friend, fun grandpa, amazing father, and devoted husband. His known trade was in mechanics but his true passion was for music. He will always be remembered for his compassionate and humble conduct towards anyone he came across. His love knew of no limits and it was unconditional. Viewing is scheduled for Friday evening November 10, 2017 from 6pm - 8:30pm at Taylorsville Stake center 4845 Woodhaven Dr, Taylorsville, UT 84123. Funeral services will be at the same address but take place on the following Saturday morning November 11, 2017 from 11am - 12pm. Family will be able to say their last goodbyes to our father from 9am - 10am just before the funeral. Then he will laid to his final resting place at Crescent Cemetery 11105 South State St, Sandy UT. All services will be under the direction of Peni Malohifo'ou from Serenity Funeral Home. The family would like to express our sincerest thanks to Serenity Funeral Home, Taylorsville 1st Ward, Taipan Trading, Lucky's, and the medical staff at the Intermountain Hospital for always taking care of our Dad. A Go Fund Me account has been setup in his name for donations/contributions, thank you again.

The family of Raymond Lei Maumasi created this Life Tributes page to make it easy to share your memories.