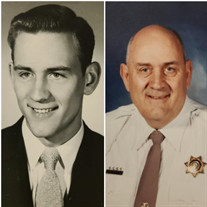 Reid Andrus Brown 1933 - 2020 Reid Andrus Brown passed away peacefully on June 4, 2020. He was born January 8, 1933, in Pocatello, ID. He was the son of J. Elden Brown and Rose Vilate Andrus. He grew up in Draper, graduated from Jordan High School and attended the University of Utah. He served in the California Mission for the Church of Jesus Christ of Latter-day Saints and afterwards served in the United States Army stationed at Fort Richardson, Alaska. Reid married Merilyn “Sunnie” Toone Nelson on May 1, 1959, in the Salt Lake Temple and they recently celebrated their 61st wedding anniversary. He was a Deputy for the Salt Lake County Sheriff’s Office for 30 years where he served in many capacities. He was admired, respected and loved by the law enforcement community. At a young age, he learned to tune pianos from his father and continued doing so throughout his life. He faithfully served in many church callings and was always prepared with jokes and a talk in his pocket. He also served a mission with his wife in the Draper Utah Temple. Reid was a gentle giant with kind eyes, a very uplifting spirit and a delight to be around. He loved to share his jokes and enjoyed making people smile. He was a great father, mentor and example to his kids and grandkids and a faithful companion to Sunnie. Reid never sought the limelight, was always a calming influence, was unflappable, quietly and dependably got things done and was a strong catalyst for hard work. He was selfless and sacrificed to provide for his family. ALL will miss him. Survived by his wife, 3 children, Michael R. (Marie), Kris Eden (Tim), Eric N. (Christine), 10 grandchildren, 11 great-grandchildren, brothers, Elden A. (Joyce), Ruel A. (Jean) and the alligator in the basement. Preceded in death by son, Jason T., parents, siblings, Donald A. and Gloria Buck. Graveside service will be held Thursday, June 11, 2020 at 11:00 a.m. at Draper City Cemetery, 12441 S 900 E. Those wishing to pay respects can attend by adhering to social distancing guidelines.

Reid Andrus Brown 1933 - 2020 Reid Andrus Brown passed away peacefully on June 4, 2020. He was born January 8, 1933, in Pocatello, ID. He was the son of J. Elden Brown and Rose Vilate Andrus. He grew up in Draper, graduated from Jordan High... View Obituary & Service Information

The family of Reid Andrus Brown created this Life Tributes page to make it easy to share your memories.