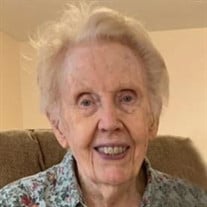 https://zoom.us/j/9474907510?pwd=bnNkZmkwbXdjK05sUUNIUTVYdVpldz09 Meeting ID: 947 490 7510 Passcode: nephi Renee Newman Curtis died at home peacefully on December 4, 2021, in Perry, Utah. She was born August 18, 1931, to Manley Augustus Newman and Maggie Matilda Petersen in Gunnison, Utah. She was baptized on September 2, 1939, and remained a lifelong member of the Church of Jesus Christ of Latter-day Saints. From the time she was a young girl she was no stranger to hard work. She fulfilled her duty on the farm and worked at a turkey plant to help her widowed mother support the family, earning 10 cents per hen and 12 cents per “tom.” Despite all of that, she never had stiches or a broken bone. She married William “Garth” Curtis, her husband of more than 60 years, on December 15, 1948, in Gunnison. They were later sealed in the Salt Lake Temple. Throughout her life, she enjoyed regular temple attendance with her family and friends. Renee and Garth lived in Aurora, Utah, before moving to the Salt Lake Valley. They resided in Murray, Utah, for 47 years before settling in Perry, Utah, in 2001. One of her cherished memories came in August when many of her loved ones, family and friends, traveled near and far to celebrate her 90th birthday with her during an open house. She was preceded in death by her husband, parents, brothers Gordon Manley Newman and Lee J Newman, and two grandchildren. She is survived by her four children David (Dianne) Curtis, Paul (Carolee) Curtis, Cassandra (Darrell) Favrot, Scott (Alexandria) Curtis, sister Marva Marx, 15 grandchildren, and 31 great-grandchildren. The family would like to thank Aegis Hospice and Elyse Wilkinson for caring for Renee during the final months of her life. A viewing will be held at the Perry Stake Center (685 Davis St. in Perry) on Saturday, December 11, 2021, from 11 a.m. to 12 p.m. with a small tribute to follow. Graveside services will be at Gunnison City Cemetery (550 N. Cemetery Rd. in Gunnison) on Monday, December 13, 2021, at 12 p.m.

The family of Renee Newman Curtis created this Life Tributes page to make it easy to share your memories.