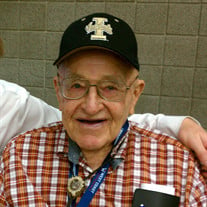 Rex Scholes Zobell, 90, passed away peacefully the evening of April 25, 2015 in Orem, Utah with family by his bedside. Rex was born in Rigby, Idaho on July 4, 1924 to Deloss and Amy Scholes Zobell, then grew up with his family in Logan and Price, Utah; and Malta and Ronan, Montana before enrolling at the University of Idaho. He enlisted in the Navy in World War II, serving at the headquarters in San Diego. Following the war, he returned to the University of Idaho where he graduated with a bachelor's degree in forestry. At the U. of I., he met Bernice Poppleton Gunnell. They were married in the Idaho Falls LDS Temple on December 22, 1948. After graduation from college, Rex was hired by the Bureau of Land Management and assigned to work in Billings, Montana. Later he took a promotion with the BLM as its district manager in Lewistown, Montana. In 1962, Rex was transferred to the BLM state office in Cheyenne, Wyoming, where he worked as a wildlife specialist. Rex and Bernice are the parents of five children: Gregory Grant (Suzanne), Ralph Rex (Janet), Dwayne Del (Donna), Amy Ann (Mike) Lindstrom, and Kerri Kay (Thom) Hall. They also have 17 grandchildren and 24 great grandchildren. Rex was an active member of the LDS Church and served in many callings including more than 20 years as ward clerk. He loved playing horseshoes and watching sports, particularly college football, basketball, baseball, and track. He was a stamp collector and an avid fisherman and hunter. Rex was the first Eagle Scout in the Zobell family. He was preceded in death by his daughter Kerri in 1997 and his wife Bernice in 2002. He was also preceded in death by his parents, sister Helen, brothers Karl and Grant, and granddaughter Natalie Miller. In addition to his four living children, he is survived by his sisters Alma Ruth Boyce, Amy (Ferris) Clegg and Janet (Bob) Swanson and his brother Keith (Dee). Funeral services will be held at the Heatheridge Stake Center, 450 E., 2000 N., in Orem, Utah at 9 a.m., preceded by a viewing at 8 a.m. at the stake center. Internment will be at the Valley Vu Cemetery in Malta, Idaho on Saturday at 2 p.m. In lieu of flowers, you may contribute to the LDS Perpetual Education Fund or your favorite charity. The family is grateful for the wonderful kindness and care given to Rex by Summerfield Manor the past two years. Serenity Funeral Home is coordinating funeral arrangements.

Rex Scholes Zobell, 90, passed away peacefully the evening of April 25, 2015 in Orem, Utah with family by his bedside. Rex was born in Rigby, Idaho on July 4, 1924 to Deloss and Amy Scholes Zobell, then grew up with his family in Logan and... View Obituary & Service Information

The family of Rex Scholes Zobell created this Life Tributes page to make it easy to share your memories.

Rex Scholes Zobell, 90, passed away peacefully the evening of...