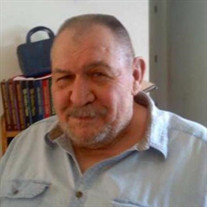 Rhonnie James Daniels passed away on November 22, 2018 in American Fork Utah at the age of 77. He had spent that Thanksgiving Day with his family and expressed his love and gratitude to each one. He passed away suddenly that same evening. His long time friend, Mike Stipa was by his side at that unexpected final moment. Rhon was born in Pocatello, Idaho on June 26, 1941 to Doris Mae Bunch and Lynn Thompson. His parents were no longer married by the time Rhon was born. His early childhood was spent with a caring guardian family while his single mother worked hard to provide for them. He also spent time with his mom as they traveled for her work. When Rhon was 8 years old, his mom married John Wayne Daniels and he became the only dad Rhon knew. In the next few years, two little sisters were added to the family. This was a big adjustment for Rhon as he had been his moms best buddie for eight years. His role of chief babysitter was tolerated fairly well. He enjoyed pulling his younger sisters behind the horse on the sled, saddling the sheep for them to ride and also tormenting them as big brothers do. He helped his dad on their sheep farm near Blackfoot Idaho. Rhon learned the value of hard work early on in his youth. He was well known for his work ethic and attention to detail. He joined the Army at the age of 17 and valiantly served two tours in the Vietnam War. He said, “we never knew who the enemy was”! He struggled from the effects of a terrible war and became an alcoholic. He married Susan Marie Vorhees in 1973. They were blessed with two sons and a daughter. Rhon was fiercely loyal to his children, family and Country. He was always an advocate of any animal that was being mistreated and generous with his means for helping others in need. He was large in stature and big in heart. Rhon had a long successful career in carpentry and passed his skills and work ethic onto his children. Rhon’s life was preserved numerous times. In addition to the War, he survived a private plane crash and years later drove his car into a moving train in the fog, causing his car and him to be drug down the tracks. He also survived a serious truck accident. There were reasons the Lord spared his life. In his later years, he overcame his alcohol addiction. His family got to know the truly good, honest and caring person he was. We are eternally grateful for that opportunity. Rhon made many wonderful friends at Heritage Care Center in his short time there and was so appreciative of everyone’s great service to him. The family also wishes to express their thanks and appreciation for his good care. We will miss being told “I love you” every time we talked to, or were with him. Rhonnie James Daniels “we love and miss you”! He is survived by his sisters, Rhonda Rae Daniels Norton (Don), Linda Lee Daniels Stevens. His children, Starla Stubblefield, Cedar Lynn Daniels (Pam), Jerry Dee Daniels Klaass (Jason), Yuba James Daniels (Goldie) and 18 grandchildren. He was preceded in death by his parents and Susan Daniels.

Rhonnie James Daniels passed away on November 22, 2018 in American Fork Utah at the age of 77. He had spent that Thanksgiving Day with his family and expressed his love and gratitude to each one. He passed away suddenly that same evening.... View Obituary & Service Information

The family of Rhonnie James Daniels created this Life Tributes page to make it easy to share your memories.

Rhonnie James Daniels passed away on November 22, 2018 in American...