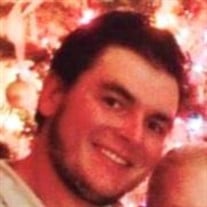 Rhys Matthew Barnett was born July 29th, 1990 to Robert Barnett and Laurie Diamond. Rhys was a fun-loving explorer in childhood. He loved adventures with his younger siblings Denton, Devyn, and Danielle. Growing up in Page, Arizona, Rhys gained an early love for the outdoors as a boating guide on the Colorado River as part of Diamond River Adventures. He also exercised his love of music as part of Winter Guard International, where he became an accomplished percussionist. He met the love of his life, Jessica Rankin, at Page High School. They later would go on to bring two beautiful children into the world: William, 9, and EvaLynn, 6. Rhys loved his children dearly and made a point to fill their lives with the fun and adventure he knew growing up by taking them on camping and fishing trips all over the Western United States. Rhys trained as a professional chef at the Arizona Culinary Institute, and all friends and family members became acquainted with his excellent cooking. He later went into sales, where his gregariousness won him friends and customers. For a time, his imposing physique served him well as a bouncer in night clubs—though anyone who knew him understood that he was a teddy bear at heart. Later, he learned sheet metal work and numerous skills in the construction trade, where he also made loyal friends and colleagues. The only thing bigger than his brisket was his heart, and Rhys made and kept many friends from childhood onward. All who knew him were inspired by his kind and generous ways. No matter the hour Rhys would be there to help anyone, be it a lost tourist or a friend in need. When Rhys was well, he was pure joy. He had a deep voice and a rolling laugh that made conversations with him addicting. He was a top-notch Dad jokester and made any gathering a bona fide party. Years of hosting private tours down the Grand Canyon planted his heart there and he often told stories of his river adventures, many ending with his amazing laugh. To our great sorrow, Rhys succumbed to mental illness on August 11th, 2021. We are left to admire the strength he displayed as he sought healing. The world is a less vibrant, less joyful place without him. We encourage any and all that are struggling with mental health to reach out and ask for help, for you are loved and needed more than you may know. Rhys is preceded in death by his mother Laurie, and grandfathers William Diamond and Arthur Barnett . He is survived by his father Robert Barnett, stepmother Bonnie Barnett, grandmother Patricia Diamond, grandmother Marcie Hazen, brother Devyn Barnett, sister Danielle Siebrecht, brother Denton Siebrecht, fiancée Jessica Rankin, children William and EvaLynn, and numerous family members in the Barnett, Rankin, and Pickering clans. Rhys’ legacy reminds us all that we are never too busy to lend a helping hand. May we never forget his generous and fun-loving ways, and may his memory endure in our hearts and minds. He will be sorely missed and forever loved.

The family of Rhys Matthew Barnett created this Life Tributes page to make it easy to share your memories.