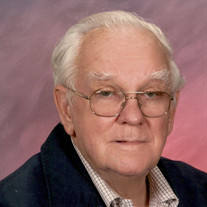 Richard Brunner, 84, passed away peacefully on July 13, 2016 in Provo, Utah. We as surviving family members are very grateful for all that our father and grandfather meant to us. He was always content with himself and life in general. Richard always had a warm greeting, a big smile and a laugh. Richard was born on June 4, 1930 in Sao Paulo, Brazil to Gottfried and Paula Chatton Brunner. He experienced a tremendous challenge as an 11 year-old boy when he contracted life-threatening osteomyelitis in his leg. Complications with this illness caused Richard to stay in a hospital for five years. He recovered but always carried physical limitations from the years he spent basically bedridden in the hospital. For example, one leg was stunted and shorter than the other for the rest of his life. But Richard always bore these burdens without complaining. He was grateful that he was able to live a long life after such an experience Richard joined the LDS church in Brazil at the age of 19 and later served as a full-time missionary for the Church in Brazil. He married Ana Marba Brunner on March 8, 1958 and they made the trip to the United States to be sealed in the Los Angeles temple on June 30, 1959, and reside in the U.S.A for a time. They decided to stay in the United States and worked hard as immigrants. Richard initially worked two jobs as a Tailor and Draftsman. He was educated in Mechanical/Design Engineering and worked for several companies, retiring from Parker Hannifin. He raised his family in La Mirada, California. They saved their money and eventually purchased rental units that allowed them to realize the American dream --- which is that success comes if one is willing to work hard and sacrifice. They considered it a tremendous blessing and accomplishment to become naturalized citizens of the United States of America in the 1980’s. Richard is survived by his son, Richard (Kristi), and three daughters, Marcia (Greg), Cynthia, Christine (Dana). Proceeded in death by his wife, parents and brothers. Funeral services are scheduled on Friday, July 22 at 2:00 p.m. at the LDS church building located at 667 North 600 East, Provo Utah. A viewing is scheduled from 12:30pm to 1:30pm prior to the funeral service. Burial will be at the Provo City Cemetery in Provo, Utah.

Richard Brunner, 84, passed away peacefully on July 13, 2016 in Provo, Utah. We as surviving family members are very grateful for all that our father and grandfather meant to us. He was always content with himself and life in general. Richard... View Obituary & Service Information

The family of Richard Brunner created this Life Tributes page to make it easy to share your memories.