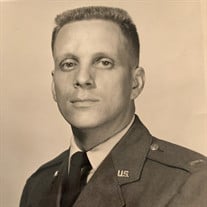 Richard Blaine Durrant June 13, 1931-July 2, 2019 Our loving husband, father, grandfather, brother, and friend passed away unexpectedly on July 2, 2019, following a tragic accident at his home. He was surrounded by his loving family at the time of his death. Richard Blaine Durrant was born on June 13, 1931 in Park City, Utah. He is the son of Richard William and Afton Carter Durrant. He served an honorable mission in California for his church from 1953 to 1955. He married the love of his life, Velma Alvey, on March 9, 1956 in the Salt Lake City Temple. Throughout their 63 years of marriage, they lived in Logan, UT, Santa Monica, CA, Saitama, Japan, Salt Lake City, UT, Boise, ID, Lehi, UT and Riverton, UT. He made many good friends along the way. Blaine earned a Bachelor of Science in Industrial Technology from Utah State University. Upon graduation, he spent the next four years as an officer in the United States Air Force. The first year he attended meteorology training at UCLA in California, and was then assigned to Johnson Air Force Base in Japan. He was eligible for the rank of captain just prior to being honorably discharged in January of 1960. Blaine held many positions throughout his early professional career, including a meteorologist on KSL Radio, an insurance salesman, and a manager at ZCMI. After earning his MBA from the University of Utah, he worked at Idaho State University as the Executive Director of the Southeastern Idaho Center for Health Resources. Ultimately, he moved his family to Boise, Idaho where he became the Director of Educational Programs for the VA Medical Center. He retired in 1991 from there with over 17 years of service. Blaine and Velma were blessed with four beautiful children, Kim, Douglas Blaine, Scott William, and Jill, whom he loved dearly. Every decision he made was made with his family in mind. Blaine loved life. He opened his heart to many, and loved to serve those around him. He was a faithful member of the Church of Jesus Christ of Latter-Day Saints and held many callings, including branch president, high counselor, and bishop. He had a valiant testimony and a deep abiding love for our Savior. One of his most cherished callings was serving as bishop of two wards while living in the Boise, ID area. He had a talent for public speaking, and was often asked to speak at various events throughout his life. He loved those he served, and he served everyone he met. He will be remembered as a courageous and dedicated servant of God. With his unquenchable zest for life, Blaine never sat still and was always looking for a meaningful project. He loved a challenge. He could find a way to solve any problem and did so with joy in his heart. He was patient, thoughtful, and kind, and had a great sense of humor. He had the rare ability to make those around him feel valued and safe. He worked hard to create a loving, supportive home for his family and his extended family, and made it a point to spend time talking to each individual person. Dad, you touched our lives in so many ways. You will be remembered for your wisdom, humor, kindness, unconditional love, and for your unwavering faith. We love you. Blaine leaves behind his wife, Velma, children, Kim (Lance) Granger, Douglas Durrant, Scott (Michelle) Durrant, and Jill Durrant, twelve grandchildren, and fourteen great grandchildren. Funeral services will be on Monday, July 8, 2019 at 11:00 a.m. at the Riverton 3rd Ward, located at 12998 South 1300 West, Riverton, UT. Viewing will be from 10:00-10:45 that morning. Interment will take place at the Utah Veterans’ Cemetery, 17111 South 1700 West, Bluffdale, UT.

Richard Blaine Durrant June 13, 1931-July 2, 2019 Our loving husband, father, grandfather, brother, and friend passed away unexpectedly on July 2, 2019, following a tragic accident at his home. He was surrounded by his loving family at the... View Obituary & Service Information

The family of Richard Blaine Durrant created this Life Tributes page to make it easy to share your memories.