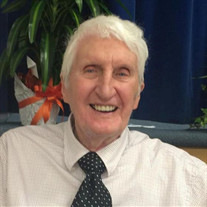 Richard Brown Horsley, 87, beloved Husband, Father, Grandfather, and Great Grandfather passed away on December 11, 2018 at Beehive Homes of American Fork. He was born to Rulon and Patricia Horsley on September 27, 1931, in Salt Lake City, Utah. He met Shirley Snow in Cambridge, MA while he was there studying for a semester. They married in the Salt Lake Temple on June 9, 1958 and settled in Provo, UT to raise their family. In his early years, Richard enjoyed playing basketball and tennis for East High School. He played basketball at the University of Utah as a freshman in college. He then served a mission for the Church of Jesus Christ of Latter-Day Saints in the Eastern States Mission, primarily serving in Kentucky and Tennessee. After his mission, he attended Brigham Young University and played basketball in 1953-54 under Stan Watts. He was listed on the roster as 6'7", 185, and he played center with jersey #17. He graduated from Brigham Young University and moved to Santa Monica, CA where he received his masters degree at UCLA. Richard and Shirley spent their first years of marriage as English teachers in American Samoa. There they adopted two Samoan children: Steven Todd Horsley and Teresa Lynn Horsley (deceased). Moving back to Utah, Richard and Shirley grew their family to 6 children, 3 Boys and 3 Girls. Richard was engaged in many business ventures namely Alpinhaus, a ski shop, Genealogical Research, and finally Pioneer Book. He served in the Provo Grandview 18th ward in many capacities, including Bishop. He was a temple worker in the Provo, Utah temple for over 30 years. Richard's passion was family history and he loved to research the Pioneers of the Church of Jesus Christ of Latter Day Saints. His Legacy is Pioneer Book, which operates today on downtown Center Street in Provo. There he could be found taking time to talk to customers about their family heritage and providing valuable insight into their genealogy. His great love of books served him his whole life and connecting people to books was pure enjoyment for him. He is survived by his children, Todd (Sarah), Michelle, Raelene (Randy), and Rick (Emily). He has 15 Grandchildren and 15 Great Grandchildren. He is preceded in death by his parents, his wife Shirley Snow Horsley (2011), his daughter Teresa (2013), and his son Matthew (1989). A viewing will be held at the Grandview 7th Ward, 1120 North 850 West in Provo, Tuesday December 18th from 10 am-11 am just prior to the funeral service which will begin at 11am. Interment will be at East Lawn Memorial Hills directly following the service. The family would like to express their appreciation to Elevation Hospice, Aspen Senior Care, and BeeHive Homes for their care and support. Flowers can be sent to the Grandview 7th Ward on Tuesday morning. In lieu of flowers, donations can be made to the church Missionary and Perpetual Education funds. Please share memories and condolences at www.serenityfhs.com

The family of Richard Brown Horsley created this Life Tributes page to make it easy to share your memories.