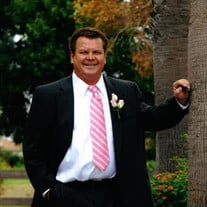 Richard Brent Lund, 59, passed away on August 26, 2016, in a car accident, in Southern California. He was born July 23, 1957 in Idaho Falls, Idaho to H. Brent Lund and Julia Ann Sorenson Lund. At the time of his death, he was married to My` Nguyen Lund. Richard and his family moved from Idaho Falls, Idaho to Costa Mesa, California at 7 years of age where he resided throughout his school years. During those years, he was active in Scouts and loved his back packing trips to the Sierra’s, with his dad and brothers. He was also involved with Jr. All-American Football and anything that took place outdoors. During his high school years, while taking a machine shop class, he developed great skills and a love for the work. His work ethic and superb skills caught the attention of a recruiter and his life long career in machine work for the aerospace industry began. Staying true to his perfectionistic ways, he once again attracted the attention of those who were building the Hubble satellite. He took pride in the parts that he personally machined for the Hubble, and they are still in space today. He married Virginia Fregosi on November 27, 1976 (later divorced) and two beautiful sons were born to the couple, Richard Justin and Jason Tyler. As the boys grew, some of their favorite family activities included, camping, boating, fishing, riding their dirt bikes and sports. His boys meant the world to him. Richard had a great sense of humor and was the ultimate tease. He was passionate about his BBQ…he was an excellent cook! Richard was thrilled to live in Alpine Utah in 2005 -2010, to be close to his parents. During that time in Utah, he drove eighteen wheeler trucks, coast to coast and thoroughly enjoyed exploring this beautiful country. He could drive anything that had wheels….he loved to drive! The pull of his sweetheart in Southern California, soon took him back and on September 10, 2011, Richard married his current wife, My` Nguyen, where they resided in Huntington Beach until the time of his death. Richard is survived by: spouse, My` Nyguen, parents Brent and Julie Lund, sons Richard Justin (Elizabeth) Lund, Jason Tyler Lund, one grandson Ryan Frances Lund, siblings Mark Dewaine Lund, Craig Lamont Lund, Kelley Jo Lund Hawkins, and Aunts, Uncles, Neices, Nephews and Cousins that loved him. Preceded in death by both Paternal and Maternal Grandparents, one Aunt and one Uncle. Graveside services will be held September 9, 2016 at 12 o’clock pm with internment immediately following at the Alpine City Cemetery Alpine, Utah. The family would like to thank Larry Hansen and The Serenity Funeral Home for their compassionate services during this difficult time. We also wish to express our heartfelt gratitude to our family and friends for your many kindnesses in thought and deed and for your attendance at the graveside services.

Richard Brent Lund, 59, passed away on August 26, 2016, in a car accident, in Southern California. He was born July 23, 1957 in Idaho Falls, Idaho to H. Brent Lund and Julia Ann Sorenson Lund. At the time of his death, he was married to My`... View Obituary & Service Information

The family of Richard Brent Lund created this Life Tributes page to make it easy to share your memories.