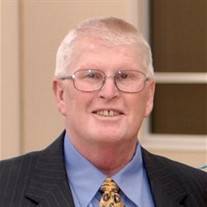 After a hard fought struggle with Lewy Body Dementia, Dick is at rest. Richard “Dick” Joseph Newth, age 75 passed away February 15, 2019, at home in Millcreek, UT. He was born in Omaha, Nebraska, January 21, 1944, and adopted as an infant by his parents, Clifton F. Newth and Mary H. Glasgow Newth. Growing up on the family farm in Venango, in western Nebraska, he often told stories about his life there, about playing sports and about his small town school. On a basketball scholarship, he attended McCook Junior College, and later went to UCLA where he enjoyed the beach, Whiskey A-Go-Go, and studied some. After college he moved to Salt Lake City and started his career in finance. First he was at Walker Bank, later started a credit union and still later, was the credit manager for high-end TV broadcast equipment for Robert Bosch Corporation. He married Anne Copeland and they eventually adopted two children, Angela K Newth Burke and Richard Thomas “Tom” Newth. In December, 1988, he married Vivian Chadwick Nowels and became a stepfather to her three sons. When the children were young he continued his interest in sports, refereeing high school basketball games. Then he got involved with youth soccer as a coach and referee. He was in charge of some youth soccer tournaments and was responsible for the soccer venue referees for the Utah Youth Summer Games in Cedar City for several summers. Dick got involved with the 2002 Olympic Games in Salt Lake City. He worked at the bobsled, skeleton and ski jump venues. He also worked at the airport during the Olympics, meeting people from around the world. While working there he contracted a virus which attacked his heart. After open heart surgery and a month in the hospital he survived. It was a life-changing event. His personality took on a gentleness that was not there before, and he no longer feared death or illness. Involving himself in the American Brittany Rescue group, he would take in foster dogs until they were adopted, often traveling to deliver a dog. In his later years he enjoyed going on road trips with his wife. They explored the country throughout the Western United States. They also went to Florida and the Virgin Islands. This last chapter of his life was a hard fought battle with Lewy Body Dementia. He knew he had a terminal disease, one of the “long goodbye” diseases. He often said he was at peace because “It doesn’t hurt to die” and “I’m not afraid to die”. Dick is survived by his wife, Vivian Newth; daughter, Angela K Burke (Jeff), grandchildren, Aaron and Zoe; son, Richard Thomas “Tom” Newth (Rona), grandchild Olive; Stepsons, Chad M. Nowels (Squeek), Matthew C. Nowels, Todd P. Nowels (Sandra); brother, Robert Newth; sister, Susan Harward. Preceded in death by parents and brother, Michael Newth. Memorial service will be held on March 23 at 2:00 at Serenity Funeral home of Draper, 12278 S. Lone Peak Parkway, Ste 103, Draper, UT. Website: www.serenityfhs.com. Family wants to thank the hospice group at Intermountain Healthcare. Donations can be made to the Lewy Body Dementia Association at lbda.org.

The family of Richard Joseph Newth created this Life Tributes page to make it easy to share your memories.

After a hard fought struggle with Lewy Body Dementia, Dick is...