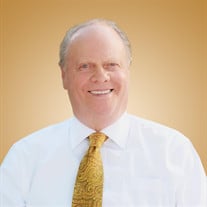 Richard Bird Peirce, 76, first child of Gordon B. and Naomi Louise Bird Peirce, passed away February 27, 2018, of complications from a heart attack. He grew up in Springville, Utah and attended school there. After spending one year at Utah State University, he served an LDS mission in the Western States Mission. Upon his return he enrolled at BYU. On May 6, 1966, he married the love of his life, Mary Kay Lawrence, in the Manti LDS Temple. Together they became the parents of five absolutely wonderful children, who, in turn, gave them fifteen(almost sixteen) incredible grandchildren. Rick spent his life working in men's retail, twice owning his own businesses. He didn't retire until the age of seventy-five. He loved his Heavenly Father and his Savior Jesus Christ and a had a firm testimony of them. He knew the Church of Jesus Christ of Latter-Day Saints was true and because of this, he served faithfully in many positions in the church, among them MTC Branch President, Bishop, High Councilor and others. He also served a second mission with his wife in Columbus , Ohio, from 2013-2014 and was presesntly serving as an ordinance worker in the Provo Temple. He is pre-deceased by his parents and is survived by his wife, Mary Kay, and children: Tawni and Jeff Porcaro, Brandon and Camille Peirce, Rhett and Jenteal Peirce, Devin and Tina Peirce, and Tiffani and Jeffrey Ford. His beautiful grandchildren are Cameron and Blythe, Skyler, Jordan and Morgan, Hayden, Hayley, Lauren, Brooklyn, Lexi , Marissa, Chandler, Jocelyn, Ava, Brynn, Chase and Ty. He is also survived by his sisters Linda Smuin and Karen Davis and his brother Don Peirce. Many brothers and sister-in-law, nieces, nephews, cousins and one aunt and uncle survive him, as well. Funeral services will be held Monday March 5, 2018, at 11:00 a.m. at the Canyon View Stake Center 575 East 800 North Orem, Utah. There will be a viewing Sunday March 4th from 6:00 to 8:00 p.m. and again in Monday morning from 9:00 to 10:30 at the same address. Our deepest gratitude goes out the staff and doctors at UVRMC Cardiac ICU for their efforts to save our sweet husband and father.

Richard Bird Peirce, 76, first child of Gordon B. and Naomi Louise Bird Peirce, passed away February 27, 2018, of complications from a heart attack. He grew up in Springville, Utah and attended school there. After spending one year at Utah... View Obituary & Service Information

The family of Richard Bird Peirce created this Life Tributes page to make it easy to share your memories.