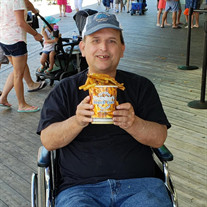 You haven't heard corny until you talked to Richard Radcliffe. He was king of the dad jokes and could play an air guitar like no one else. He was a great story- teller and if you let him, he would bend your ear with his Army stories for hours. He was proud of his military service and was highly disappointed when he was unable to continue his army career and forced to take a medical discharge. Richard married his sweetheart, Lori Martindale on December 5, 1985. He not only gained a wife but also gained her two daughters whom he adopted and raised as his own. He dearly loved his family, especially his grandchildren. They called him Papa and thought he was the goofiest grandpa ever but they loved it. Even though his health didn't allow him to get up and play with them, he entertained them with silly noises and faces and would let them lay in bed with him watching SpongeBob. It broke his heart that his health often did not allow him to attend their soccer game or piano and dance recitals or even a birthday party. But they all knew that Papa loved them. Richard's favorite thing to do was cook. He watched all the cooking shows and his family and friends were often recipients of his incredible creations. He loved hearing the compliments on his food, which encouraged him to cook more. Richard was generous to a fault. No matter what situation he was in, he would give anything to someone who needed it. He always felt he didn't do enough. He always wanted to do more. Richard died at home on September 22, 2020 surrounded by family due to complications of his myotonic dystrophy and the effects of his medications. He is survived by his wife Lori Martindale Radcliffe, his children Melissa Martin (Jason), Nikki North (Jeff), Mallory Mortensen (Travis), Jaimie Radcliffe, Ricky Radcliffe and Mark Radcliffe. His grandchildren Stacey, Jayden, Kail, Amelie, Alisa, Carson, Acelynn and Liam. Sister Patti Walthall Johnson (Tim) and his brother Marion John Walthall Jr. He was preceeded in death by his step- father Marion John Walthall and his mother Norma Carol Stinnett Walthall. Richard's funeral was held on September 24, 2020. Internment was the same day at the Utah Veterans Cemetery & Memorial Park in Bluffdale, Utah. Richard, our beloved husband, father, grandfather and brother, you were enough.

You haven't heard corny until you talked to Richard Radcliffe. He was king of the dad jokes and could play an air guitar like no one else. He was a great story- teller and if you let him, he would bend your ear with his Army stories for hours.... View Obituary & Service Information

The family of Richard Jay Radcliffe, Sr created this Life Tributes page to make it easy to share your memories.

You haven&#39;t heard corny until you talked to Richard Radcliffe....