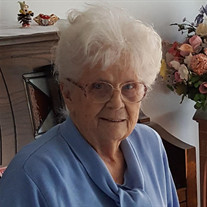 Ricorda Bowen Bowns, age 94, passed away on March 10, 2017 at her home in Orem Utah. She was born May 4, 1922 in Spanish Fork, Utah to Mary Agnes Larsen and William Wallace Bowen. Ricorda, known to most as “Corkey” was the 5th and last child. She married Harold Christen Bowns on March 28, 1941 in the Mesa, Arizona Temple. Ricorda is survived by all her children: Jeanne Eakins, Michael Bowns(Diane), Karen Day (Wilford), David Bowns, Robert Bowns, Richard Bowns (LaNel), and William Bowns (Lynn). She is also survived by 29 grandchildren and many great grandchildren. Ricorda was preceded in death by her husband, Harold, her parents and all her siblings: Shirley Hales, Virginia King, Wayne Larsen Bowen, and Lewis Keith Bowen. There will be a viewing Wednesday, March 15, 2017 from 6:00 to 7:00 pm at 590 N. 900 W. Orem, Utah. The funeral service will begin at 7:00 pm. Ricorda will be laid to rest Saturday, March 18, 2017, in the Fair Oak Cemetery in Fair Oaks California beside her husband following a brief funeral service at 7800 Santa Juanita Avenue, Folsom, California. To share condolences to the family visit www.serenityfhs.com

The family of Ricorda Bowen Bowns created this Life Tributes page to make it easy to share your memories.