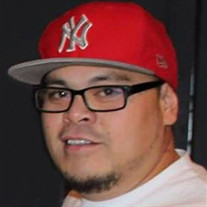 Robert Uga Alo, age 38, passed away on February 28, 2019, in Sandy, Utah. He was born on April 21, 1980, in Ogden, Utah to Falepule and Dottie Alo. Robert Uga graduated from Horizonte High in Salt Lake City, Utah, in 1998. Later he graduated with an Associate’s Degree in Graphic Design, 2011 from Provo College. He lived in Utah, California, Nevada, and Louisiana. He was employed as a heavy machine operator for 15 years, but during that time he would dive into his favorite hobbies designing websites, t-shirts and logos. He had an eclectic taste in music but seemed to love Led Zepplin and ACDC with slow jams and country a close second. He was a huge Denver Broncos fan no matter where he was. And he loved to talk about many different subjects with all walks of life. He loved cake frosting without the cake. He did many random acts of kindness, of which many came to our knowledge after his passing. Robert had several interests and dreamed of partnering with his dad on another martial arts studio. Robert spent a good part of his life hanging out at our father’s karate studios training to become a Black Belt in American Kenpo Karate at a very early age. He loved to teach karate to little kids. When he was only 8 years old he taught his own class of young students. He was a lifelong member of the Church of Jesus Christ of Latter-day Saints. He served as an Elder’s Quorum Teacher. He was endowed in the Jordan River Temple. There was never a time, Robert was not helping someone. Even when he had nothing, he would find some way to help. His love for his family was unbreakable, whether it was buying whoppers at Burger King or playing chauffeur for the day or running errands for his mom and dad. He did what he could. He was passionately driven and wanted to provide for everyone around him. He was always quick to forgive. Everyone loved his smile and remember him as a great conversationalist and making people feel comfortable and welcome. He was always making jokes and enjoyed lightening the mood. He loved his nieces and nephews and would play with them all the time. He loved to dress up with his Tim’s (boots), his hats, his shorts or jeans. Although he was always repping LSU Tiger being so proud of his brother being a cop in Louisiana, he was a die-hard University of Utah fan. Go Utes! Robert married Rita Tammy Tupuola on July 21, 2001, in Taylorsville, Utah. This marriage was later solemnized in the Jordan River Temple. After 15 years and four children later they went their separate ways. His life was his kids. He worked and sacrificed much for them, taught them gospel principles through action, coached his sons, and adored his daughters. To Robert, his children were the substance and purpose for his very existence. Even though he has begun a new journey in another life, he will continue his love and care for his children forever. He is survived by his children, Rhonnah Fa’avae Alo (16), Tony Faofua Alo (15), Xoe Dottie Alo (14), and Santana Matthew Malumalusa (13). His parents, Falepule and Dottie Togisala Alo. His siblings Christopher Samuel Alo (Mazzie), Gonzales, Louisiana; Sterling Aisa Alo (Nia), Salt Lake City, Utah; Perinisese Teleni Alo-Stotler (Robert Siu), Independence, Missouri; and Mycal Ruben Alo (Dawn Katie), Midvale, Utah. His Grandmother, Teleni Togisala, along with many aunts, uncles, nieces, nephews, and a million cousins. We also want to acknowledge his very special friend, Ane Vailea and her daughters. This incredible woman helped Robert through his newest trials and was a source of joy during the last four years of his life. Service information. Service will be held on Saturday, March 9, 2019, at Midvalley 2nd Ward (Samoan) 1106 E. 8050 S. (Old Dairy Road), Sandy, Utah, 84094. Family Services at 9:00 a.m., Open services from 10:00 a.m. – 11:00 a.m., ending with the Funeral Service from 11:30 a.m. – 12:30 a.m. Interment will be at Lindquist Washington Heights Memorial Park, 4500 South Washington Blvd., in Ogden, Utah, 84403 at 1:45 p.m. We wish to publicly thank all our family and friends who have traveled near and far, sacrificing their time to be with us this past week. Your stories, memories, and spectacular music comforted us in our sorrow and lifted our spirits during this difficult time for our family. Truly your love and prayers were deeply felt by each of us. We love Robert so much and will miss him, his presence, his service, his smile, and his incredible gentle spirit of love for all of us. Until we meet again Robert Uga Alo. Rest in peace. Please feel free to share memories and condolences at www.serenityfhs.com.

Robert Uga Alo, age 38, passed away on February 28, 2019, in Sandy, Utah. He was born on April 21, 1980, in Ogden, Utah to Falepule and Dottie Alo. Robert Uga graduated from Horizonte High in Salt Lake City, Utah, in 1998. Later he graduated... View Obituary & Service Information

The family of Robert Uga Alo created this Life Tributes page to make it easy to share your memories.