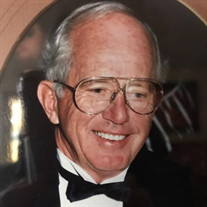 Robert O. Baldwin 1926 ~ 2017 Robert O. Baldwin "Bob", Born December 14, 1926 passed away on November 3, 2017 due to age and natural causes. Bob was born to Jay and Irene Baldwin, of Tooele Utah. He had one brother, Jay Baldwin, who passed away in 2003 at the age of 80. He is survived by his wife, Vivia, three children, five stepchildren, seven grandchildren, and two great grandchildren. In 1954 Bob married Natalie Donovan of El Paso Texas. Together they have three surviving children, Brad R. Baldwin (Linda), Bryce J. Baldwin, and Cathy B. Davis, all residing in Salt Lake City. Natalie died tragically in 1972 at age 38. In 1973 Bob married Neta Habbeshaw Anderson of Salt Lake City. Neta also had three children, Jennifer Garrett, Kristen Debenham, and Shaun Anderson, all residing in Boise, Idaho. It was a crowded house for a while. Neta passed away in spring 1982 at age 43, after a long battle with cancer and Bob was at her side throughout her ordeal. In 1983, during an Alaska cruise in Juneau, Alaska, Bob was married at the Faith Lutheran Church near the Mendenhall Glacier to Vivia Kay Farley of Salt Lake City. Vivia has been a loving and devoted wife to Bob for over 33 years. She has two children, Danica Farley of Carlsbad, California, and Gregory T. Farley, of Coeur d'Alene, Idaho. Bob and Vivia enjoyed many years and activities together including the Utah Jazz and Utah Utes games, fine dining, dancing, opera, their garden and annual trips to Coronado, California and Mazatlan, Mexico, where they had many friends and grew to love the local culture, beaches, and food. Vivia cared for Bob immensely as he slowed down. In all, Bob played a critical role in raising three families and enjoyed every minute of it watching them all grow and pursue their passions. Bob was raised in Tooele, Utah, where his father managed the JC Penney store and Bob helped out. In 1944 at age 18 he joined the U.S. Coast Guard with his best friend, Bill Griffith, mostly because Bill was too short to join the Navy and they wanted to enlist together. They were life-long friends. In the Coast Guard during WW II he was assigned to the USS Gen. C.H. Muir, which transported troops and spent time patrolling the South Pacific Islands. His ship was docked in New York when the war ended. Bob also spent his early years working in Yellowstone National Park and he always loved fishing and camping in Yellowstone and the great outdoors. He graduated from the University of Utah Law School in 1952. After graduating, he worked in El Paso, Texas for an oil and gas company and there he met Natalie Donovan when he got off the elevator on the wrong floor. Bob and Natalie later returned to Utah where they raised a family and Bob practiced mining and real estate law for many years. Bob taught his extended family many things: how to make friends, to be honest, how to play tennis and golf, fish, hunt, ski, camp, play cards, and make a good drink. He could fix about anything, or at least he would try. His frugality was legendary and created many lasting stories. He loved his dogs; Pepe, Frida, Duke, Sophie, and Lucky and always had a soft spot for golden retrievers. Bob read a book per week for most of his life and would freely share his favorite books with friends and family. Many were on the Civil War. Bob also loved his boat and his motor home and spending time at Flaming Gorge, Lake Powell and in the Utah mountains. Sometimes Bob would just sleep in the motorhome parked at his house and pretend he was camping. He was also a master bridge player and he and his partner won several tournaments. In his later years he set up an aquarium in his room; a bird sanctuary and fishpond in the yard and tended to them joyfully. Bob was always optimistic and would regularly sing out "it's clearing in West" and "it's a sunny day." The family would like to thank the VA Hospital and the staff of the William Christoffersen Veteran's Home in Salt Lake City for their tremendous care. He met many friends at the Veterans Home and the staff was always kind and supportive. Any donations in remembrance should be made to the VA Medical Center in Salt Lake City. To share condolences with the family please visit: www.serenityfhs.com

The family of Robert O. Baldwin created this Life Tributes page to make it easy to share your memories.