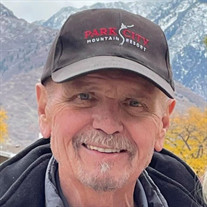 Our loving Dad, Grandpa, Brother, and Uncle Robert “Bob” Hall Tueller, 68 from Salt Lake City, Utah passed away on Friday November 19th at home with his family. Bob was diagnosed with Pancreatic Cancer in 2020 and fought a valiant fight until the end. Bob was born on Father’s Day June 21st, 1953, to Donald Dustin Tueller and Norma Hall Tueller in Idaho Falls, Idaho. Bob was the 5th of 6 children born to Donald and Norma and from the beginning Bob was always on the move. Described as, always doing things and so fun. Never a complainer, a sweetheart and always had a smile. He loved his family and always loved holding babies. The Tueller family eventually moved from Idaho to Bountiful, Utah where Bob attended and graduated from Viewmont High School. Many stories have been told of Bob and his buddies releasing stolen, greased pigs into the halls of Viewmont High School shortly before graduation. He did not snitch though. Word has it, that the story is legend. Bob served a mission for the Church of Jesus Christ of Latter-Day Saints in the England Central Mission, and he often said that those two years were some of the greatest times of his life and one of the things he was most proud of. Bob returned from England in 1974 and married Jan Brown in the Salt Lake City Temple. Bob and Jan had two children together, Natalee and Bob. Bob married Laurie Ballantyne in 1982 and gained his second son, Adam. Bob and Laurie had their daughter Candice to complete the family. Bob worked hard his entire life and was proud to provide for his family and children. Bob had a long career in tire sales with Michelin and Bandag. Later in life, Bob worked selling cars, as a project manager and in security at the Canyons Ski Resort in Park City. Bob retired from working in 2019 and was comfortable living in downtown Salt Lake where he could be close to his kids and grandkids. Bob’s favorite thing in life were his kids and grandkids, calling his kids “the loves of my life”. A lifelong BYU fan, Bob loved the team from the South but would gladly cheer and support any Utah college team. His favorite sports team was the Skyline Eagles. He loved watching his grandsons and granddaughters play the sports they loved and excel at their hobbies, and he could always be found cheering them on. Bob was a lover of motorcycles and cars and loved to talk shop on both. He enjoyed playing golf; a love which both of his sons carry on to this day; skiing, camping, traveling, and hunting. Bob’s vehicles were always impeccably clean, and he could be found on Saturday mornings cleaning every car in the household. Bob loved to cook and eat. Spending time in the kitchen, working up Sunday dinners and holiday meals for others made him so happy. Making friends wherever he went, people loved Bob for his kindness, amazing smile, beautiful eyes, and great hugs. Always one for great debate, Bob was a lifelong Republican, a true patriot who loved to share his sometimes-strong opinions, but always in a loving and caring way. Bob was not one for a lot of sleep and could be found walking and “getting his steps in” at all hours of the night and watching Fox News, Discovery Channel and Food Network. Humorous and quick witted until the end, he never missed a chance to make us laugh. Bob was loving, supportive, kind, and compassionate and never said a bad word about anyone. He epitomized the meaning of unconditional love. Bob is preceded in death by his parents Donald and Norma Tueller and his youngest child Candice Tueller. He talked of looking forward to being reunited with them all in heaven before his passing. Survived by his siblings; Joan (Gary) Bennett, Brent (Kaye) Tueller, Sue (Rich) Edwards, Craig (Cauleen) Tueller and Ted (Sandee) Tueller as well as many nieces and nephews. He is also survived by his children Natalee (Roy Stephenson) Tueller, Bob (Deborah) Tueller and Adam Tueller along with his grandchildren, Elder Luke Tueller, Keyli Tueller, Zach Tueller, Annie Tueller, Mylie Tueller and Nick Tueller. The family would like to thank Huntsman Cancer Institute, Huntsman Acute Care and Infusion Centers and the many doctors, nurses, MA’s and more who helped in caring for Dad over the last year and a half. A special thanks to Dr. Laguna-Garrido and his team for giving Dad the best fighting chance during his cancer treatments, CNS Hospice, Bristol Hospice, Serenity Funeral Home, and Dad’s friends at Calvary Towers for their support and friendship of Dad. Dad loved his siblings so very much; we want to thank Dad’s siblings for their love and support and to Rich and Sue Edwards and Ted and Sandee Tueller and Tueller’s Press for their assistance with the funeral. We also want to say thank you to Mele and Lee, Dad’s caregivers in his final days who not only provided support to Dad but to our family, we cannot thank you enough. Services for Bob will be held Saturday December 11th at the Neff’s Canyon Ward House 4176 Adonis Drive, Salt Lake City, UT 84124. There will be a reception held from 10:00am – 10:50am followed by the funeral service at 11:00am. Flowers can be sent to the home of Natalee and Roy at 8612 S. Mount Majestic Rd. Cottonwood Heights, UT 84093.

Our loving Dad, Grandpa, Brother, and Uncle Robert &#8220;Bob&#8221; Hall Tueller, 68 from Salt Lake City, Utah passed away on Friday November 19th at home with his family. Bob was diagnosed with Pancreatic Cancer in 2020 and fought a valiant... View Obituary & Service Information

The family of Robert "Bob" Hall Tueller created this Life Tributes page to make it easy to share your memories.