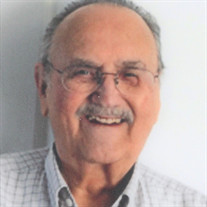 Robert Emmett Cates, aged 92 passed away on May 7, 2019 at his home in West Jordan, Utah. Robert was born October 19th 1926 in Portland, OR to Richard Albert and Mary Sophrona Cates. He married DeLone Wilson on December 15th, 1949 in Brigham City, UT. He is survived by his wife, DeLone; his children Terry Watters, Gregory Cates (Kris), Debra Quick (Byron), and Anthony Cates; Grandchildren Justin Watters (Kara), Brandon Watters (Jaime), Kerianne Watters, Cristie Watters, Danielle Clemons, Geoffrey Cates (Andrea), Christopher Quick (Michelle), Jennifer Quick (David), Michael Quick. And many great grandchildren. The following was written by Bob some years ago: "When I was a child I did a lot of work around our yard and in the house - yes, I did housework, like washing dishes, making beds, etc. I mowed the lawn, pulled weeds and did other similar yardwork. There was only my brother, Bill, and me to help my mother, so we had a lot to do. We managed to get in some play time too. When I was about 8 years old I worked for my uncles hauling hay, hoeing beets and other farmwork. When I was about 12, I started working for other farmers: picking beans, cherries, tomatoes, peaches, apples, etc. The first place I moved when I first left home was into the U.S. Navy, where I spent about 2 1/2 years. My friends were many, but here are a few I can remember: Gordon Holmgren, Douglas Christiansen, Frank Taylor, Shirl Gardner, Verl Iverson, Palmer Iverson, Lee Johnsen, Stan Reese, Dwight Anderson, Frank Anderson, Max Holland, Martell Mortenson, Etc. And now, the girls: Donna Barker, Arley Mateson, LaPreal Dallin, Sally Ramsdell, Arletta Checketts, Betty Holland, Varda Hansen, Rayola Andreason, etc. I guess my favorite relative was my Uncle Ben. I guess I liked him so much because he was sort of a father to me. He was a man's man and yet he could be very gentle for such a big powerful person. He was always very good to me and my brother. My favorite hobby (in fact the only hobby I can remember) was making model airplanes from balsa wood, tissue paper and glue. They were powered by rubber bands attached to the propeller and they would actually fly! (most of the time). I went to Bear River City Elementary School up to and including the 8th grade. From there, I went to Box Elder High School for 3 years, joining the U.S. Navy at the start of my senior year. I had to complete high school through special testing after I got out of the Navy. DeLone and I met at a basketball game (church "M" mens basketball) in which I was a participant. It was in the middle of winter (January 1949) and we were introduced and I took her home. We started dating and were married about a year later (15 Dec 1949) in her Uncle Bob's home in Brigham City." This is where his first-hand account ends. In the years that followed, they were blessed with four children; Terry in 1950, Greg in 1952, Debbie in 1956, and Tony in 1957. At the time of their marriage, Bob was attending Utah State University when he was offered a position with Northrop in California for the defense industry. From 1955 to 1961 the family moved often while working in the defense industry, returning to Utah in 1961 to work for Thiokol. A large layoff at Thiokol left him with no job, so he returned to Utah State University to complete his degree in political science, graduating in 1966. After graduation, Bob went to work for Ogden City, and was involved in special studies that led to the Ogden Redevelopment Agency. In 1969, he started work for the Salt Lake County Planning Commission where he contributed to the conditional use and zoning processes in the 1970's. He supervised the zoning enforcement and zoning information systems for 20 years until his retirement in 1987. Following his retirement, he started doing what he really wanted to do and became a travel agent, helping people live their travel dreams. The family moved to Salt Lake City in 1971 and has lived in the valley to this day. He was preceded in death by his mother and his father, and his only brother, Bill. In lieu of flowers please make donations to the Utah Humane Society. Services will be held Friday, May 10 at Camp Williams Cemetery - 17111 South Camp Williams Road in Bluffdale at 1:00 PM.

Robert Emmett Cates, aged 92 passed away on May 7, 2019 at his home in West Jordan, Utah. Robert was born October 19th 1926 in Portland, OR to Richard Albert and Mary Sophrona Cates. He married DeLone Wilson on December 15th, 1949 in Brigham... View Obituary & Service Information

The family of Robert Emmett Cates created this Life Tributes page to make it easy to share your memories.