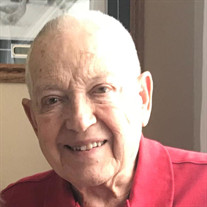 Robert Edgington - Graveside Service Time: Sep 13, 2021 11:00 AM Mountain Time (US and Canada) Zoom Link https://us02web.zoom.us/j/82214597931?pwd=T0s4L2tCdC9iRE9mV2U1RHpSSzNKQT09 Meeting ID: 822 1459 7931 Passcode: Serenity Robert W Edgington was born on April 13, 1926 in Billings, Montana and was raised by his Grandpa Knute and Grandma Barr in Chinook, Montana. Family and friends called him Bob, then Big Bob after our parents named their son Bob. Later in life, Turbo Bob became his nickname because, well, he did like to drive fast. Being raised on a farm, Bob learned a great work ethic. He knew how to work hard and fully complete a job. He also had a heart for one little runt piglet that his Grandparents were sure wouldn’t make it. Upon asking permission, they allowed Bob and his brother Dick to raise the piglet thinking the boys would never succeed. The brothers took turns throughout the nights feeding him warmed milk while keeping him wrapped in a blanket for warmth. They named him Porky and raised him to be one huge hog. Porky would run between their legs when he was afraid as a little pig, which didn’t work out so well as he grew. Upon graduating high school, Bob and three buddies enlisted in the Army Air Corps. They were excited to serve their country that they loved, yet just before they were to receive orders, WWII ended and they all returned home. Not long after returning to Chinook, Bob went to a dance. His shy friend asked him to dance with a particular pretty gal so he could cut in. So much for that plan, Bob never did let him cut in. On October 6, 1946, Bob and Dolores were married. Later they moved to Torrance, California where Bob began his career in Aerospace. He loved being a Drafting Engineer and worked primarily for Boeing but was contracted out to most aerospace companies over the years. The work ethic Bob learned as a young man, he taught to his three children Linda, Bob, and Shari. Breakfast was fun with Dad. He taught them how to make pancakes, fried bologna, and oatmeal. He could often be heard whistling while doing projects around the house and the yard. Together, Bob and Dolores met with the youth group at Christ the King Lutheran Church. They loved being taught the Word and how to pray each week. He also taught Sunday School for years and sang in the choir. Bob cared for his wife in her declining years. He really did put her first in so many ways believing this was his call from God. He so wanted to go home to Heaven with Dolores hand in hand but did say often, “Ok Lord, I’ll stay as long as You want me to, but not one second more!” Bob went Home on August 30, 2021 to Jesus, Dolores, and their daughter Debbie, who had passed in 1965, one year to the day that Dolores passed last year… so sweet~

The family of Robert W. Edgington created this Life Tributes page to make it easy to share your memories.