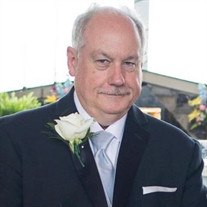 It is with great sadness to announce that on Friday, April 22, 2022, Robert Lawrence “Bob” Glovan, Sr., passed away unexpectedly at the age of 62. He was surrounded with love by his children, Jennifer and Bobby, as he went peacefully home to be with God. Bob was born on February 12, 1960, and was raised in Stowe Twp., PA. He attended elementary school at St. Malachy Catholic School, Sto-Rox High School, graduated from Penn State University, and later from La Roche College and Point Park University. Bob had several hobbies; most notably his love of sports, especially Penn State football, UNC Tarheel basketball, as well as his hometown teams the Steelers, Penguins and Pirates. He loved fishing, dogs, travel, and spending time with his many friends and family members. Bob found his passion and career in the field of education, as a middle school teacher, focusing on history and social studies. He taught at schools across the country, and was teaching at Fort Washakie Middle School in Wyoming at the time of his passing. He has touched many lives as an educator and was loved by many colleagues and students. Bob will be remembered for his love of people, being a proud father and spending time with close friends and family, as well as his ability to talk to anyone, his humor and cracking jokes. Bob is survived by his two children, Jennifer Lynne (Matt) Mottes and Robert Lawrence “Bobby” Glovan, Jr., as well as numerous cousins. He is preceded in death by his father Edward F. Glovan and mother Ruth M. Glovan. Family and friends may pay their respects and celebrate Bob’s life on Friday, June 3, 2022, with a mass at St. Malachy Church at 10:00am (343 Forest Grove Rd. Coraopolis PA 15108). Immediately following mass, he will be brought to his final resting place with a burial ceremony at Holy Souls Cemetery in Robinson Twp. (4772 Campbells Run Rd., Pittsburgh, PA 15205).

It is with great sadness to announce that on Friday, April 22, 2022, Robert Lawrence &#8220;Bob&#8221; Glovan, Sr., passed away unexpectedly at the age of 62. He was surrounded with love by his children, Jennifer and Bobby, as he went peacefully... View Obituary & Service Information

The family of Robert Lawrence Glovan Sr. created this Life Tributes page to make it easy to share your memories.

It is with great sadness to announce that on Friday, April 22,...