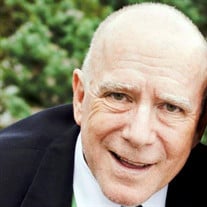 Robert Jordan McDonald (Bob) passed away peacefully, though suddenly, on the morning of Thursday May 14th, 2020 in his home in Draper, Utah. Robert was born to Ellen Jane (Jordan) and Franklin Robert McDonald on September 30th, 1950 in Santa Ana, California. He was a 1968 graduate of Garden Grove High School, and attended college at University of Redlands and UC Berkeley. He is survived by many dear friends he has kept from those treasured years. Robert is also survived by his daughter, Karllen Jordan Johnson, his step-children, Doug Warr, Dawn Norton, and Deena Putzier-Richie, and his dear sisters Linelle Guiso and Maureen Rader. He is also survived by two Aunts, Bertha Wheeler (96) and Sally Jordan (90), as well as 13 grandchildren, and 6 great-grandchildren…and last but not least, his best kitty-friend, Gandalf. We are a large and loving family. He now rests with his beloved wife, Myra Carol Beesley McDonald, who passed in September of 2008 from cancer. Bob was a man loved by absolutely every single person who came into contact with him. His warm smile, hearty laugh and endless knowledge of random trivia, history, film and music delighted all who had the opportunity to be near him. He was a devoted father and grandfather. In his school days, he was known to be buried with his head in a book, and was a brilliant student with a particular gift for writing and an interest in journalism. Unfortunately, he was struck with severe manic-depressive syndrome in his twenties, and was unable to finish his college degree. This did not stop him in the least however, from having some of the craziest adventures, (most of which turned his entire family “grey” prematurely!) and leading a bright and fulfilling life. In 1989, he met the woman that would give him the greatest gift he thought he may never have- a family of his own. Myra and Robert married in 1990, and he was welcomed into a loving family with 3 step-children. Myra and Robert had one child of their own in 1991, Karllen. Bob was a spiritual man, who loved his savior Jesus Christ and loved to worship and celebrate life with music, friends and family whenever he was able to. He made friends with absolutely everyone who crossed his path, and kept many of them close to his heart. He sure loved his cats, his books, his music, and above all, his friends and family. He will be dearly missed. Until we meet again. There will be a viewing held for Robert Tuesday, May 19th from 1:00-4:00pm at the Serenity Funeral Home of Draper located at 12278 Lone Peak Pkwy #103 Draper, UT 84020. Masks are encouraged, guests will visit him in groups of 15. There will be a graveside service following the viewing from 4:30-6:00pm at the Sandy City Cemetery located at 700 E 9000 S in Sandy, UT 84070. We will share memories and music and prayer.

Robert Jordan McDonald (Bob) passed away peacefully, though suddenly, on the morning of Thursday May 14th, 2020 in his home in Draper, Utah. Robert was born to Ellen Jane (Jordan) and Franklin Robert McDonald on September 30th, 1950 in Santa... View Obituary & Service Information

The family of Robert Jordan McDonald created this Life Tributes page to make it easy to share your memories.