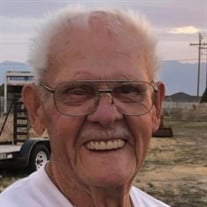 Robert Leonard Morton, age 92, passed away March 9, 2022 in Payson, Utah. Born: October 27, 1929 St. Helena, California to Robert Morton and Mary Sproston Morton. Married Edith Scott Bunker – later divorced Married Margaret Gomez Robert grew up and finished high school in Napa, California. Met Edith Scott and became best friends who ran away and eloped when her parents were out of town. Robert joined the army and served during the Korean war and upon his return met his 10-month-old 1st born, Terry. After an additional 4 children, they divorced. A year later he met and married Margaret Gomez and had his 6th and final child. After several moves and jobs, Robert found his niche in the grocery store industry as a clerk where he worked until a self-chosen early retirement. Dad traveled the country and the world, which he enjoyed. He loved camping and his daughter Tina joined him on his trips around the world as well as his camping trips. Dad was a fisherman and loved nothing more than to meet up with his brother Albert and nephew Ron to go catch fish! He was an organized, neat and tidy man, with a wonderful green thumb! He loved to tinker in his garage with every tool under the sun! He was a wonderful grandfather and always looked forward to a visit. Survived by his children: Terry, Linda (Dave) Zuckerman, Lance (Lily) Rebecca (Hal) Peery, Tina. Brother Greg, 19 grandchildren, 42 great grandchildren, 4 great, great grandchildren. Preceded in death by: Wife Margie, Son Robert. Graveside service will be held on March 15, 12:00 PM at the South Jordan Cemetery Thank you to the kind and thoughtful caretakers at William E. Christopherson Veterans Home in SLC, and also at Central Valley Veterans Home in Payson, Utah.

The family of Robert Leonard Morton created this Life Tributes page to make it easy to share your memories.