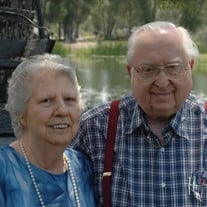 Ronald Claude Barker obituary for Salt Lake Tribune, Deseret News, Idaho Falls Post Register, and Logan Herald Journal Ronald Claude Barker of Hunter (West Valley City) died Tuesday, July 10, 2018, in Salt Lake City, surrounded by his family. He was born Sept. 28, 1927, in Newton, Utah, to Stephen Waldo and Hazel Vilate Larsen Barker, the third of four children. He loved telling stories of growing up in a home attached to his parents’ businesses, Barkers’ Barber and Beauty Shop, on Main Street in Smithfield, Utah. As a young entrepreneur, he grew and sold green beans, repaired bicycles, bought and sold spare parts, and learned all he could learn. He loved to repair cars as well.¬ Ron started college at 16 years old, and was drafted near the end of World War II. While his fellow soldiers were sent abroad, Ron was retained at Fort Lewis in Washington because he knew how to type. He joined the ROTC in college after the war and continued to serve his community and country throughout his life. He earned his bachelor of science in accounting in 1949 from Utah State University with minors in military science and political science. While working as a CPA in Idaho Falls, he met the love of his life, Geraldine Phillips. Ron was accepted to Harvard and Stanford law schools. But he chose instead to attend the University of Utah to be near Geraldine, so he could court her and persuade her to marry him. They married April 2, 1952, in the Idaho Falls Temple, then moved to Salt Lake City, where Ron obtained his law degree in 1955 from the U. An attorney for 63 years – and a CPA since 1950 – Ron held membership in the Alpha Kappa Psi fraternity and in the Utah State Bar. He qualified to argue before the 10th U.S. Circuit Court of Appeals and the Supreme Court of the United States. He practiced law professionally at his own Barker Law Office in South Salt Lake until five months before his death at age 90. Ron had a strong testimony of Jesus Christ, whose life he emulated. He served as a bishop and as a counselor in both the Hunter West Stake and the Hunter Central Stake presidencies. He also served as stake and ward financial clerk, high councilor, young adult Sunday school teacher, and as a dedicated home teacher. He was willing to serve in any calling. In his professional work he was truly devoted to the people he represented. Many times if they could not afford to pay him, he cheerfully accepted whatever goods or services they offered instead. Even outside of work and church service, he was always looking for ways to help others. He was a paragon of Christ-like giving and serving, and was a man without guile. Many Christmases he delivered dozens of turkeys to friends and neighbors in need. He financially supported LDS missions for four sons, a daughter, and several grandchildren. Often friends and strangers approach Ron’s family members to thank them for the help this generous man gave — most of which was unknown to anyone else. Always a busy man, he maintained a home office as well as his formal office so that he could be near his family more often. When his children were young, in the evening when he returned home from work, each child would excitedly line up to “run and jump” (as they called it) into his arms. Often he’d continue working into the night after dinner with the family. One of his daughters told her elementary-school teacher that her father was a “typewriter.” He began a note excusing that daughter’s absence from school with “This is to acknowledge that . . .” He took the time to teach his posterity that working a little harder to do one’s best is worth the effort. He is survived by Geraldine, his wife of 66 years, and their nine children: Stephen (Glenda) Barker of West Valley City; Bart (Patti) Barker of West Jordan; Luann Claussen of Pocatello, Idaho; Mitchell (Sandi) Barker of Nampa Idaho; Beth (Dave) Noyce of Salt Lake City; Sterling (Shelly) Barker of Bountiful; Samantha Barker of Salt Lake City; Dawn (Bill) Nelson of West Valley City; Marshall Barker of West Valley City; 41 grandchildren, 45 great-grandchildren; one great-great-grandchild; his sister, Leone White of Roy and his sister-in-law, Beth Gray of Idaho Falls. Preceded in death by his parents, brothers, Darwin and Lloyd Barker, granddaughter, Meda Maureen (Maren Greathouse) Barker, grandson, Isaac Brigham Barker, and great-grandchildren, Timbre Barker, Travis Joseph Gardner, Maggie Gerianne Hartley and Lavender Juliet Aurora Lujan Barker. Funeral services will be Saturday, July 14, at 1 p.m. at the Hunter Central LDS Stake Center at 3930 S. 6000 West, West Valley City. Family and friends may call July 13 from 6 to 8 p.m. at the LDS Chapel at 3665 South 6000 West, West Valley City, and July 14 from 11:45 A.M. to 12:45 P.M. at the Hunter Central LDS Stake Center. Interment will follow the service at Pleasant Green Cemetery, 9200 W 3500 S, Magna, UT.

The family of Ronald Claude Barker created this Life Tributes page to make it easy to share your memories.