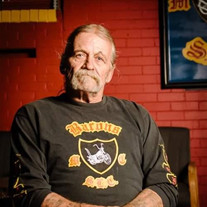 Ronald Landh Simmons “Dirtbag” 1951 - 2019 Ronald Landh Simmons (68) passed away peacefully at his home in Magna, UT with his loved ones by his side on 12/13/2019 after a courageous battle with cancer. His mind was strong to the very end, but his body was fading, so he decided to “get the hell out of Dodge”. Ron was born in Salt Lake City, Utah on 08/24/1951 to Darlene Landh, who later married Arlin Simmons. Growing up Ron’s Family traveled and lived in several places. He proudly served in the U.S. Marine Corps from 1968 to 1969 and was honorably discharged. He found his way back to Salt Lake City where he became an outstanding member of The Barons Motorcycle Club on 01/27/1978 to Present. Over the past 41 years, Ron held several officer positions in The Barons, most notable being President and Ambassador. Ron or “Bags” (to those close to him) was an Icon in the Motorcycle World known by Motorcycle Clubs around the Globe. He was pure class, a true “Wild One”. Bags truly was one of a kind, whose toughness was rivaled by few, and his integrity, kindness, and generosity for others were unmatched. Ron was also the successful Owner/Operator of All-American Towing for several decades. Ron had a resilient work ethic, often being on call 24/7 while enduring severe weather and road conditions. Ron had many passions, none equaled the love and affection he had for his Family, Brothers and all animals. He was a loving Son, Brother, Father, Uncle, Grandfather, and Husband. Ron was preceded in death by his Mother-Darlene Landh Simmons, Grandmother-Elin Landh, Wife-Cari Martin, Wife-LaRae Simmons, Stepson-Derek Shaw, and Brother-Johnny McLaughlan. He is survived by Father-Arlin Simmons (Joanne), Wife-Dennette “Curly“ Simmons, Daughter-Krista Ohlund Blaxton (Eric), Daughter-Cherishe Simmons (CJ Mullins) Grandkids- Shez Linnarz, Kainen Martinez, Anthony Martinez, Kaycee Martinez, and Casey Mullins. Daughter-Cassidy Simmons (Alex Lamb) Grandkids- Jayce Raddatz, and Vee Lamb. Daughter-Jessica Simmons (Mike Cordova) Grandkids-Brynlee Jones, and Nautica Groat. Grandkids-Rocky, Jasmine, and Chloe Blaxton, Granddaughter (Derek’s Daughter) Nastasha Larae Govan. Sister-Vicki Simmons Caldwell (Richard), Sister-Suzanne Simmons Burkhalter, and Sister-Christie McLaughlan-Riley. As well as many Nephews, Nieces, and Cousins. Ron also left many beloved pets behind. He was also Preceded in death by several of his Baron Brothers, and many Brothers from other Motorcycle Clubs. Surely, they are all having one hell of a party now on the other side! "Bags" was often the life of the party! See you down the road "Bags", until we meet again B.F.F.B. Ron’s "Bags" Celebration of life will be held Friday January 17th, 2020 11:00 A.M. at the Calvary Chapel of Salt Lake 460 Century Dr W, Murray, UT 84123, Followed by the Service at 1:30 P.M. held at Camp Williams Veterans Cemetery & Memorial Park 17111 S 1700 W, Bluffdale, UT 84065.

The family of Ronald Landh "Dirtbag" Simmons created this Life Tributes page to make it easy to share your memories.