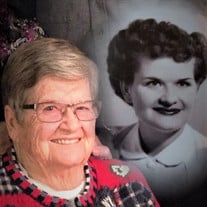 Rose Katherine Keiffer April 2, 1929 – June 11, 2017 Rose K. Keiffer, age 88, of Evansville, WY passed away in Highland, UT on Sunday, June 11, 2017. Rose was born in Wheatland, WY to Tillie (Patrick) and Robert B. Westwick on April 2, 1929. She grew up in Wheatland and was a majorette at Wheatland High School. Her first job was clerking at the corner Wheatland Drug Store. She lived all of her life in WY with exception of the last three years in UT. In the 1880’s Rose’s great-grandfather James Westwick and family moved from Illinois and settled in Wyoming Territory on Wagonhound near present day Douglas, which grounded her in this state she loved. In 1946, Rose married George A. Rhinehart in Wheatland and they had two daughters, Nancy and Bonnie. Tragically, in 1951 George was killed in a horse roping accident at a local ranch. That fall, Rose and girls moved to Casper where she began classes at Casper College held at that time on the top floor of Natrona County High School. She finished her nursing course work through the University of WY and in 1954, graduated as a Registered Nurse. In 1952, Rose married Robert H. Clark in Torrington, WY. His USDA work with farmers and ranchers took them to Riverton and later to Casper in 1957 where they settled. Two sons, Robert and James, and a daughter, Laurie, were born to this growing family. Rose worked as a nurse in Riverton and in Casper in various capacities. Much of her work was in the emergency room and on 4th surgical floor at Natrona County Memorial Hospital. She enjoyed the care giving aspects of nursing and many people today remember and mention what a wonderful nurse she was to them. A fatal heart attack suffered by Bob in 1968, cut their time together too short. In 1971, Rose married Ernest J. Keiffer in Casper and they enjoyed raising their blended family together. Their 42 years of marriage were cherished not only by the two of them, but also the entire family. Outdoor activities, holiday dinners, fresh garden vegetables, and good company could always be found at the Keiffer home. Rose’s hobbies included reading, growing plants, sewing, photography, family history, hunting small beautiful rocks, collecting and making dolls, writing letters, attending garage sales, keeping up with activities of children and grandchildren and giving handmade gifts to family members. Rose was the anchor of her family – a devoted wife, mother, sister, aunt, grandmother and great-grandmother. She was known for putting needs of others before her own. She was kind, generous and encouraging to family and friends. Her faith in our Lord and Savior Jesus Christ was ever bright and hopeful. She was a member of the Church of Jesus Christ of Latter Day Saints. Rose was preceded in death by her parents, two sisters, Roberta Westwick and Louise O’Connell, three husbands, daughter Bonnie Murray, and stepson Vance Keiffer. Rose is survived by four children: Nancy Gerlock and Laurie Clark of Casper, Robert (Doreen) Clark and James Clark of Salt Lake City, two step-daughters: April Keiffer of Evansville and Melodie Welch of Nashville, TN, twenty-three grandchildren and a host of great grandchildren, nieces and nephews. She will be well remembered and deeply missed by all those who knew her. Services for Rose will be held Saturday, July 1, 2017, at 11:00 a.m. at the Church of Jesus Christ of Latter Day Saints located at 2627 E. 7th Street in Casper, conducted by 2nd Ward Bishopric. Graveside services will be held later in the afternoon at Wheatland Cemetery in Wheatland, WY. In lieu of flowers, donations may be made to Central WY Hospice and Transitions Center, 319 S. Wilson, Casper, WY 82601. Condolences and messages are sincerely appreciated may be left for the family at this website: www.serenityfhs.com.

The family of Rose Katherine Keiffer created this Life Tributes page to make it easy to share your memories.